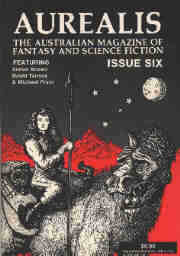 Which brings me to some of the recent comments regarding Jodie Kewley's story, "The Tree", which appeared in issue two of Aurealis. "Search as I may," wrote Paul Forno in our letter column in issue five, "I cannot find a link with the sf/fantasy theme of the magazine. I feel the story is more appropriate to Reader's Digest or Woman's Weekly." And he hasn't been the only one to comment.

Perhaps "The Tree" may not at one time have made it into the pages of an SF magazine, but clearly speculative fiction is organic. Stories, like Jodie Kewley's, which have a magic realist flavour are now appearing in all sorts of unexpected places.

Perhaps SF itself is a huge tree which we could trim and cut back if we wanted to, but which some of us choose to allow to grow unhindered, to see what direction its growth will take.

Magic realism is raining down on speculative fiction, and who are we to mop it up before it nourishes the roots. In the drizzle it becomes more difficult to find boundaries — not only between SF and mainstream literature, but also between the Spanish-speaking and the English-speaking literary worlds. Let's accept it, and use it to enrich our genre.

Why can't Peter Carey be embraced by both the SF and the mainstream community in Australia? Why can't a story be suitable for both Aurealis and Australian Short Stories?

It shouldn't really be a case of us and them any more — the aliens have changed since The War of the Worlds, and I don't think we want those sort of aliens back, do we?

It seems to be a natural law that wherever there are tall buildings, people will jump off them. The true statistics of suicide in any modern city are horrifying and, therefore, carefully concealed from the general public; for every one that makes the morning paper, there might be ten or twenty that do not. Kids that think they can fly, old women fed up with life, businessmen with their backs against the wall — all are united by the eternal euphoria of weightlessness, and the mortal smack of flesh on sidewalk.

So, given this history of suicide, Marcus Gardening, a technician for the city roadworks authority, was not entirely surprised to look up from his work one dark morning before dawn to see a man clinging to a ledge, several storeys up the side of a nearby office building…

Next of Kin – Shane Dix

There was, once upon a time, a biped washed up on our shores. It fell from the starry waters in a rippling ball of fire, screeching as if in pain as it disappeared behind the mounts that lay warmwards from our nest. The brood became agitated by the fiery arrival, and within moments of the sighting, some of the elders had begun to cut a path through the forest in the direction of the fallen prey…

The night was 340 hours old with a dozen more to sunrise when the call came. Ryon sat up groggily in his darkened bedroom and touched the comm to silence its gong. He touched it again to receive.

The face of Chief Traffic Controller Isambard appeared. Without preamble Isambard said, "Passenger shuttle has gone down on Jules Verne. Be ready in fifteen."…

Poor, fat Linda lay on her metal-frame bed in the darkness, eyes closed and a few small frown lines wrinkling her brow, visiting the place inside her head where the monsters lived.

All the Fires of Lebanon – Simon Brown

The whole building shook. Grey dust snowed down around us, making us sneeze and our eyes water.

"What was that?" Morrison asked.

I saw Hamble cock his head to one side, listening for a second explosion, but none came. "I guess a howitzer," he said solemnly. "If it was a tank I think there'd have been a couple of rounds."

We all listened more attentively then, in case he was wrong and a second round was still on its way…

…Emily felt uneasy. It was true that she did not like Ewan going to The Rocks on his own. It was not because of the stories, the myths surrounding the area, but simply because it was a dangerous place.

"People have died there, Ewan."

"People die all over the place, people die in hospitals — lots of them. If you can't feel safe in a hospital…"

"The only danger is carelessness. There are rocks and water there, and the only reason that anyone gets hurt is because they are careless. Water can kill you. Rocks can kill you. Local superstitions can't."

The boredom the Customs man had previously evinced was nothing to the boredom Rick felt as he trotted out his explanation for his status. "That's right. It means that I impersonate Elvis in looks, moves, voice, the whole stage show. But I won't go all the way and die from the effects of drugs on an obese, bloated body. Only Elvis Presley Impersonators, First Class, will do that."…

Lady of the Night – Jane Meredith

When he says later, "I met a woman on the beach. Gillian. Do you know her?" they are stilled for a moment.

"Our Jilly," says the publican, choosing glasses carefully, weighing them in his hands as if looking for one undersize. "Don't pay her too much notice, she's a bit wild."…