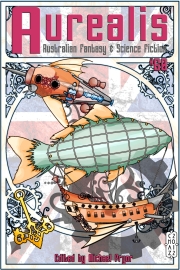 The best in Australian Fantasy and Science Fiction, featuring ‘Betrayal’ by Marta Salek, an exotic and magical tale of elsewhere, and the coolly stylish ‘Catspaw’ by James Bradley. Plus the best news, reviews, and interviews in the world of Australian Speculative Fiction. Miss it not.

From the Archives: Cosmo Tucker – Researched by Michael Pryor

When writing High Fantasy, one of the challenges is to maintain a certain level of diction. By this, we mean the sort of language used in the body text and in the dialogue of the characters. It comes down to vocabulary and sentence structure in the end, and with the usual quasi-medieval setting of most High Fantasy, this means a certain old-fashionedness in language.

What the writers of the best High Fantasy strive for is to achieve a consistent level of old-fashioned language, one that gives the illusion of being archaic. There are many ways to do this, but one of the simplest and best is to avoid anachronisms.

Many, many years ago I came across a stark example of this in a Choose Your Own Adventure book. Things had been going along well, with a mixed adventure party (elves, dwarves, humans) pottering about meaningfully in a perfect medieval castle, and then they met a party of bloodthirsty goblins. That's when the chief elf uttered the immortal words: 'Let’s make hamburger out of them!'

This was a moment of complete ejection from the world of the story. I was unwilling to continue reading—an outcome every writer wants to avoid.

How to avoid anachronisms? A good historical dictionary is most useful, one that cites the first appearance of a word, but more important is a sensitivity to language. When writing in this mode, a writer simply must understand that language changes, that how we speak today isn’t the way people spoke years ago. Reading texts—novels, plays, poetry—from centuries past can be helpful. ‘Is this the best/most appropriate word?’ should be a standard question every writer asks of his or her own work. Building up a list of words that are perfect, contextually, is a good strategy.

This brings us to the vexed question of ‘okay’. No other words screams modernity to us more than ‘okay’. It sounds so contemporary, so urban, so up to date, that every time a bold knight or cunning sorceress says, ‘okay’ we groan.

This is even though we know that ‘okay’ isn’t as modern as we feel it is. It has a reasonably venerable history going back to the early 1800s, even though its precise organs are hotly contested. And we realise that most of the other words a writer uses aren’t historically accurate either, but our contention is that some words are signifiers, that they are language landmarks where a writer stakes her or his claim to authenticity. When ‘okay’ appears in a High Fantasy book, it’s like an atomic-powered killing machine appearing in Pride and Prejudice.

To our mind ‘okay’ is out of place in High Fantasy, and using it is a mistake.

'He is a dark shape silhouetted against a backdrop of flames. The sun had dropped beneath the horizon hours ago, hiding its face from the devastated ground. He bends forward slowly and scoops up a handful of soil. It's leached dry by the conflagration he'd earlier helped unleash. The granules slip through his fingers, falling towards the earth below. He allows his mind to slip with them…' Betrayal – Marta Salek.

'It is after ten when the man enters, the waft of cold air blowing in behind him, making the couple who linger by the window glance around. The Rakshasa is seated at the table he keeps at the rear; looking up, he sees the man's eyes on him, feels his hackles rise.' Catspaw – James Bradley