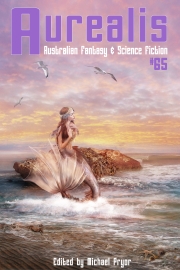 The latest issue of Australia’s longest running speculative fiction publication has done it again, with unsettling tales from Jason Franks and SG Larner, plus a witty and deep insight into the world of sleep in Patricia O’Neill’s latest ‘Xtreme Science’ article – plus, reviews!

From the Archives: The SF Hall of Fame – G K ‘Doc’ Tolliday D.D.

One of Science Fiction’s great themes is looking at the future. Aurealis has done more than its share in this field, with the usual mix of calculated prophesy and wild imagining.

It’s an outsider’s mistake, of course, to think that SF is solely concerned with predicting the future. This has really only been a minor concern of the genre, with more hits than misses. For every Arthur C Clarke, who accurately imagined communication satellites (tellingly, not in a story but in a non-fiction article) we have thousands of writers whose stories were bizarrely off the mark. The internet, the major pervasive influence in the early twenty-first century, was famously missing from just about every SF story through the fifties and sixties, which would seem a galaxy-sized lacuna.

SF is more about imagining possible futures rather than predicting our actual future. Imagining possibilities gives a writer room to move, to explore where we are going, to extrapolate trends that will provide fertile grounds for narrative.

Australia has a long history in this field, most notably beginning with Catherine Helen Spence’s A Week in the Future, first published in 1888. This was a classic experiment from one of our greatest social activists, where she imagined a socialist-feminist utopian future—the year 1988!

The glorious future that Spence imagines has extraordinary developments in child-rearing and education, as well as huge changes—for the better—in the influence of religion. Poverty has been eliminated and the class system is a thing of the past, while men and women are equals in almost all ways. Most daringly predicted, from an 1888 viewpoint, was the depiction of freely available contraceptives, part of a more open attitude to sex.

A realistic future? Perhaps not, but that’s not the point of Spence’s story. She is challenging the mores of 1888 through postulating a vastly changed future. Was she betting that her predictions would prove to be true? Probably not, but she was dreaming a dream.

The future is out there, coming whether we’re ready or not. SF helps us prepare for it by presenting us with some of the possibilities that lie ahead.

From ‘Butcher’s Hook’ by Jason Franks: ‘She looks terrible. Hair in disarray, makeup streaked like a horror movie victim, scars from her implants showing where she’s bursting out of her halter top. My old friend, the kind-hearted rock angel, is having a celebutard meltdown, right here in my hallway.’

From ‘Poppies’ by SG Larner: ‘Screams punctuated the cold night air. Zahra clung tight to Adir, trembling as she buried her head in his shoulder. He tightened his embrace, whispered soothing words.’