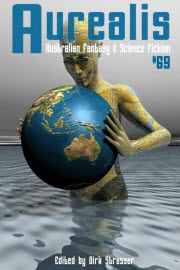 Aurealis #69 features Richard Viskovic’s ‘The Electric Itch’, which is guaranteed to make you scratch just thinking about the technology depicted, and Mick Spadaro’s ‘It Came From A Party Supplies Store’, which is one of those rarities—an SF story that aims to be funny, and actually is funny.

It Came From a Party Supplies Store—Mick Spadaro

From the Archives: So, you want to be a science fiction writer—Stephen Higgins

Can you believe that by next year, Aurealis will have been continuously publishing fantasy and science fiction for twenty-five years? In a period where technology has changed dramatically and publishing has undergone a revolution, Aurealis has reigned as Australia’s top speculative fiction magazine for a quarter of a century. We think this is a milestone worth celebrating!

We will announce more about our plans later this year and into next year, but there is one landmark event we want to share with you now. As part of our twenty-fifth-year birthday celebration in 2015, we will be publishing our all-time top twenty-five Aurealis stories in our Best of Aurealis anthology both in print and as an eBook.

And to keep up our tradition of supporting local authors, our plan is to make this the highest paying SF anthology ever published in Australia. Although our contracts, in most cases, allow us to reprint stories in an anthology without further payment, we will be running a crowd-funding campaign to ensure a payment of 7c per word for each story, which is above the SFWA’s rates for professional publications. Our aim is that every author who appears in the Best of Aurealis anthology will have a professional credit according to the SFWA criteria.

So how are we going to decide which are the best stories to have appeared in Aurealis since 1990? We are going to ask you, as our readers and subscribers, to help us make those decisions. We’ve already surveyed our 2013 subscribers, and have found the stories that they voted as the best we published last year:

2. ‘The Sheep King’ by Chris Stabback

3. (joint) ‘Love Over Glass, Skin Under Glass’ by Penny Stirling

As the next step we are now asking you to vote for what you consider the best three of the twenty Aurealis stories first published in our epublication form in 2011 and 2012. Please make sure your choices are registered by the 25th of April, 2014. Stay tuned for more updates on opportunities to influence which stories will be selected.

For all of you who have considered submitting a story to us, now would be the ideal time to do it. Stories published in 2014 will also be eligible for publication in the Best of Aurealis anthology. We have already filled up a number of issues this year, but there are still some spots left. Remember, too, that we fast-track submissions from subscribers in our assessment process. So if you are going to submit to us and you aren’t already a 2014 subscriber, now would be a good idea to subscribe as well.

Will any of this issue’s stories make it into our anthology? Richard Viskovic’s ‘The Electric Itch’ is making me scratch just thinking about the technology depicted, and Mick Spadaro’s ‘It Came From A Party Supplies Store’ is one of those rarities—an SF story that aims to be funny, and actually is funny. Don’t miss another Stephen Higgins’ classic from the archives: ‘So, you want to be a science fiction writer’. There’s also our Tim Hehir interview where the author of Julius and the Watchmaker talks about playwriting, Google-bait and the logic behind rearranging inter-dimensional atoms.

Turnin' into an alien ain't easy, but I got it down to a fine art. Takes about fifteen minutes. Used to take half hour, cos there was arguments and it was quite a squeeze fitting into the pants.