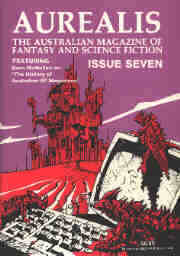 People often ask us, "Why did you publish this particular story?" . . . Well, that's not quite true. What they usually ask us is, "Why didn't you publish my story?" Before I answer that question, let me set the scene for you:

Every few weeks I get a bundle of stories to read. (I should point out that I live in Horsham, a small city some four hours drive from Melbourne.) . . . (I should also point out that it looks like this is going to be one of those editorials with lots of asides in brackets.) Of this bundle of stories (approximately sixty  and they said we would have trouble getting enough stories) . . . (And I was right about the brackets, wasn't I?) Anyway, of these sixty stories perhaps five might be seriously considered for publication.

I'm not trying to put anyone off the idea of submitting  I'm simply giving you the facts. The five stories selected as "possibles" will be given another reading, and may well end up being read by four or five people before being accepted or rejected. We feel that this process should negate any vagaries of taste. (For the record: Dirk likes fantasy, I like science fiction  although we both enjoy the other genre . . . If you know what I mean . . . Put it this way: I really like Tolkien and Dirk loves Silverberg . . . and I like Phillip K. Dick and Dirk likes . . . okay . . . I like cricket and Dirk likes wrestling  need I say more?) So, given all of the above, we feel we are qualified to know what our readers want, and the success of Aurealis proves our point. So there.

But back to our original sixty submissions. Five are being considered for publication and the rest are . . . well, the rest are being considered for rejection. So, fifty-five rejections  of these, some may be borderline and we will request a rewrite. Perhaps the story is good but the dialogue is not  nothing kills a story quicker than poor dialogue. Or maybe there is a basic flaw in the story that the author has not noticed.

Many, many stories that we reject are simply re-hashes of old SF themes or ideas, and nothing new has been added. Whilst we are sure that the author thinks his or her story is totally original, it is not. There must be hundreds of authors who, after having finished a story, think, What a totally original idea  I wonder why no-one else has thought of this? The trouble is, they have  and they wrote a story about it that was published in Amazing Stories in 1957. Some BDBs (Been Done Befores) may slip through  we hope not; but no matter how widely read you are, you can't read everything.

Remember, we will publish good, original fantasy and SF. We are proud of the number of new Australian writers we have introduced, we welcome submissions from anyone as long as they suit our guidelines, and we plan to remain Australia's best science fiction and fantasy magazine for a long while.

…Farrant touched the icons floating in the holo and reduced the display by a factor of two to the minus ten. The blip representing the ship was still alone. He reduced again, to such magnification that anything galaxy-sized should have appeared: nothing. He tried again, but there was nothing system-sized or even planet-sized within scanner range. A true void.

The Pangaea slowed from MFTL to FTL to impetus-speed. The ship's fuel and oxygen needed replenishment, but there was no matter which could provide these within scanning range.

To Farrant's amusement, he realised the most advanced spaceship ever to leave Earth was becalmed…

The Box of Sorrows – Aziz Salim

…The teacher spoke: "Your third year of apprenticeship is over, Nina. You must now take the test of mastery. Before you lies the Box of Sorrows and Happiness. Both of the boxes you see require a key, but you need choose only one. One of them is the Box of Mastery. Choose well. If you succeed, you will leave me a Key Maker."

Inspector David Potter saw things more clearly than most people. He saw Tau Ceti Intersection slowly spinning in space, orbiting the sun where a seventh planet would have been if one had been born. He saw, as if it was a blueprint in his mind, the Intersection's sixty levels, and the one and a half million souls that inhabited them. And he saw, and understood, that whenever there were that many living, thinking and working beings pressed together, there would inevitably be a Shagtown, a place where the down-and-outs, the oppressed, the poor, the fugitives, congregated like aphids on a rosebush on a warm spring day back on Earth…

A Messenger to the Dragon – Andrew Harvey

Lord Selk, first of the Dragon clutch, member of the Imperial Pattern, and heir apparent to the Eastern throne sat tiredly on the step outside the smoking house. His legs ached, his scales itched, and his eyes hurt from the dryness of the air this high into the mountains. They had been on the road for three weeks now and were still several days away from Sanctuary…

…"Arnold Simmons, for your outstanding bravery and service to every man and woman alive, I, the Galactic President hereby bestow upon you the freedom of the Galaxy for life!"

A vast cheer erupted from the masses below and resounded throughout the valley.

Seventeenth best? In disgust Simmons called out "Kill Game!" and everything went blank  except for a small green sign flashing in the centre of his field of view which read GAME OVER…

The Steeple Monster – A F Kidd and Rick Kennett

…I'm afraid I must tell you at the outset that this is the story of a partial failure. I've been in Essex the past fortnight, to Fenwick St Giles to be precise. I'd received a letter from the Vicar of the place, asking if I could take a look at his church's bell tower. Apparently the steeple-keeper had gone up into the belfry and had never returned. A search of the tower and the church found no trace of the man. It was, as the Vicar wrote, as if the steeple had simply swallowed him'…