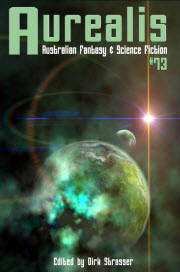 This issue features the near-future Melbourne of Daniel Baker’s gritty and evocative ‘Refraction’ and a chilling transformation story, ‘Kisses with Teeth’, by Allan Chen.

Those who look in at science fiction from the outside focus obsessively on the narrow predictive qualities of science fiction, and make their judgements on the quality of a work based on the accuracy of the predictions. That’s obviously a nonsensical criterion for a work of fiction. For one thing, if this was the criterion, then you would need to potentially reserve your judgement on a work for centuries. You wouldn’t be able to say a novel was any good until you could see how well the author foresaw the future, as if SF writers were really just fortune-tellers.

Here are some of the successful predictions attributed to science fiction writers which I’ve had a stab at ranking in terms of significance of prediction:

1.      Ray Bradbury’s Fahrenheit 451 (1953) predicted earbud headphones, describing them as ‘little seashells… thimble radios’ that brought an ‘electronic ocean of sound, of music and talk and music and talk’.

Ray Bradbury’s novel is universally laudedas a masterpiece, while Hugo Gernsback’s novel is usually derided as a work of fiction and almost no-one reads it anymore. Yet the level of prediction in Fahrenheit 451 is trivial compared to Ralph 124c 41+. In these examples, the quality of prediction is actually inversely proportional to the literary merit. The better the prediction, the lousier the fiction! (Sorry, Hugo, at least you had an award named after you.)

I think we can all reasonably conclude that we’re never going to be invaded by Martians, but that doesn’t diminish H G Wells’ The War of the Worlds. I can’t wait to see whether gorillas and chimpanzees take over the planet so that I can decide whether I’ve enjoyed Planet of the Apes or not.

Let’s not allow those outside of the science fiction to place value criteria on SF that has nothing to do with good writing. Science fiction explores futures and possibilities, but its worth doesn’t lie in the accuracy of the speculation. I would argue that what good science fiction writers do isn’t predicting the future, but influencing it. Before something new can come into being, someone has to imagine it first. So, not only could science fiction writers be responsible for the drive-in, they could also have some responsibility for the sexual revolution!

The near-future Melbourne of smart clouds, mutated fauna and air filtration towers in Daniel Baker’s ‘Refraction’ in this issue isn’t one that I would want to see come into being, but his predictions are gritty, evocative, and rich with imagery. The second story ‘Kisses with Teeth’ by Allan Chen is a much more personal horror story, exploring one man’s reaction to a chilling transformation. Our ‘From the Archives’ this issue starts our Sacred Cows series where we review classic SF novels as if they had been published today. It features Orwell’s 1984, another work where the discussion can get bogged down about its predictive value. Shane M Brown’s article, ‘The Secret to Selling eBooks’, continues his series on thriving in the new publishing eco-system we live in, and we round things off with a bumper crop of reviews of the latest speculative fiction.