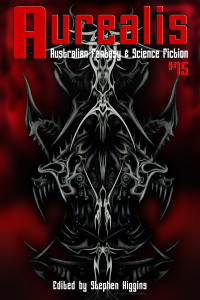 Issue #75’s fiction department features Cecilia Quirk’s ‘Scattered Souls’ and ‘The Nevermaw’ by Miles Hurt, two pieces that will engage and entertain. There is also a wealth of non fiction with a plethora of reviews, as well as a short look at the recent World Science Fiction Convention held in London. plus another Sacred Cow article where a classic work is reviewed (in a light hearted manner) as if it had just been released. Just tons of good stuff!

During a recent trip overseas I was able to attend two days of the London World SF Convention (Loncon3) where I found myself pondering what makes Australian SF different from other SF. This explored a little more in an article on the convention, but I wanted to touch upon here as a sort of follow up to some previous editorials that explained what we like in a story.

We are seeking to publish good quality stories. The fact that we are based in Australia (and are ‘The Australian Science Fiction and Fantasy Magazine’) means we have more stories from local writers. We have published stories from writers based elsewhere, but my discussions with a few readers and writers indicates that there is a distinct flavour to the stories we publish that is peculiarly Australian.

I spoke about this with one publisher at Loncon3, and he said that he felt that the ‘feel’ of Australian writing offers something different to the reader who is accustomed to an American/European worldview. He struggled to verbalise his thoughts about this, but said that much of the Australian writing he had come across struck him as fresh/dry/open. He thought a lot of it seemed to be set in deserts, or at least in arid landscapes and that this seemed to lend an alien air to the backdrops of stories, as far as northern-hemisphere readers were concerned. I pointed out that much Australian writing has urban settings and that he seemed to be employing a clichéd view of Australian culture. He agreed. As I mentioned he did have problems putting his observations into words but he was adamant that Australian writing is different. At one stage he even commented on the success of aboriginal dot painting and thought a similar argument could be made for the popularity of that style of painting.

I personally think there is an element of Australian writing that is perhaps unique to writers who have lived here and have managed to incorporate something of the Australian ‘feel’ into their work, but perhaps it does just go as far as that, that there is an Australian feel to Australian writing. You could argue that British writers seem to be concerned with style, and Americans with ideas if you want to broadly generalise writing from different countries.

It’s an interesting area and I can see myself pursuing it a little more. Feel free to add your own thoughts on the topic on the webpage.

From Scattered Souls by Cecilia Quirk

Cecilia Quirk is a Melbourne law student whose interests include medievalism, human rights law, and spending too much time on tumblr. She is a contributor to the Melbourne Review of Books.
:

Anney collected him at the usual place. A young man, this time, able-bodied and without scars marring his features. He wasn’t even weeping. Most did, when it came to this. They started to beg and to struggle and to say they didn’t mean it, they didn’t, and anyway it hadn’t been them.

From The Nevermaw by Miles Hurt

Miles Hurt lives in Castlemaine, Victoria with his partner and their two young children. He is a teacher, which allows him to spend time each day sharing books with young people and talking about writing.
:

In this space between worlds, Raskin beheld an unfathomable beast. He saw the Nevermaw. The great negating power, an endless gush of history sluicing into its gullet. Appalled, he witnessed endless human lives gorged upon, made blank.

These visions tortured Raskin for days at the bottom of that well.

From From the Archives: SF's Sacred Cows by Stephen Higgins

Stephen Higgins is a playwright, short story writer and awards judge. He co-founded Chimaera Publications in 1990 and has co-published Aurealis for over 20 years.
:

Here is a novel that will really get the juices flowing for any fans of fantasy out there. This novel has a bit of a pedigree and the discerning reader should note that this does not mean it’s a bit of a dog. The Lord of the Rings has a debt to pay to other fantasy novels.

From Loncon 3 by Stephen Higgins

Stephen Higgins is a playwright, short story writer and awards judge. He co-founded Chimaera Publications in 1990 and has co-published Aurealis for over 20 years.
:

I recently returned from a trip overseas. It was one of those trips that one does. It used to be called the Grand Tour, back when aristocratic young men and women took in the sights of the European continent in order to improve themselves and acquire some sort of classical education or at least an appreciation of the arts.