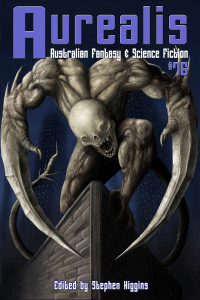 This issue features stories by Meryl Stenhouse and Melanie Rees as well as our monthly review of new titles and yet another instalment of ‘Sacred Cows’ by Stephen Higgins.

I was showing the ‘raw’ contents of this issue to a friend of mine just recently and she spoke about the quality of the artwork. I had another look at it and I have to say I think the illustrations and cover art are indeed very strong in this issue. The covers that have adorned Aurealis over the years have provided much discussion in the old Aurealis office. Generally the interior artwork is fine with everyone, but for some reason the cover art has always drawn some heated responses. I should probably be honest and say that it is generally me who provides the dissenting voice. I don’t know why this is the case. I don’t have really strong feelings about art. I am not an arty type. I don’t know much about art, but I know what I don’t like. That slight variation on a cliché probably sums it up.

The first few issues of Aurealis had covers by a then-unknown Shaun Tan, who has since gone on to great success (including an Oscar, no less). After a few issues, I felt we lost our way a little with depictions of people riding oversized animals. Then we had our ‘dark’ period, and then we went through some very complex covers. I think I like simple, clean covers. This cover by Dan Angleone appeals to me because of that fact. I have liked the last few, actually. My all-time favourite Aurealis cover was #51 by Mike Worall. If the cover tells a story, that’s fine. If it just looks nice, or striking or impresses in some way, that’s fine too. The job of the cover has altered somewhat from our print copy days. The cover doesn’t have to stand out from the crowd of other magazines, but it still does need to appeal to the reader. If someone sees an intriguing cover on the Smashwords site, they might be inclined to look inside. I probably most like the ones I would be happy to see hanging on the wall of my study. Umm… plus some others that I find too disturbing to want to hang on my wall, but which I like simply because they really do disturb me. I think I will just rely on my earlier claim of knowing what I don’t like rather than knowing what I do like. I don’t like amateurlooking work, and I don’t like offensive images. Of course, what I find offensive might be at odds with the opinions of a lot of other people but I certainly wouldn’t want to offend a potential reader with a cover that seems offensive to me, so there’s that to consider when choosing a cover.

We are always looking for cover art, so why not take a look at the artist guidelines on our web page? Give it a shot. You could be the next Shaun Tan.

As part of the ongoing celebrations surrounding our 25th anniversary, we are proud to announce the launch of our new website. If you want to have a look around the new place, go to aurealis.com.au and check out all of the great stuff.

Don’t forget that Aurealis is published ten months per year; the next issue will be out in February 2015. To ensure you get a full year of fantastic fiction delivered throughout 2015, please resubscribe now via our new website.

From No Home For Us by Meryl Stenhouse

Meryl Stenhouse lives in subtropical Queensland with her family, a weed-infested garden and far too many characters. She has been a research scientist, call-centre operator, auditor and environmental officer but now prefers just writing fiction.
:

Makeda surfaced beside her ship like a shark. Her first mate, Yeene, surfaced beside her with barely a ripple. The lights of Ceel Gaan formed a halo behind Yeene’s head and made silhouettes of the other ships in the bay. In the dark hours before dawn, the pirate stronghold on the coast of Somalia still raged and danced and drank the profits of a scavenger’s life.

From The Long Shadow by Melanie Rees

Melanie Rees is an environmental consultant whose work involves playing with soil and plants. When she isn't gallivanting in the mud or stuck up a tree she writes speculative fiction and poetry.
:

As I swung on the old tyre swing, my shadow split down the middle. The front half of my shadow crept along the ochre clay, scaled an ironstone rock, and darted down a shallow crack. The rest of my shadow swung as innocently as the swing.

‘Jam!’ I dragged my sneakers against the hard dirt and stopped swinging. My shadow stopped a second later. It was late in the day and I was tired. Who could blame it for being a few seconds behind the pace?

From From the Archives: SF's Sacred Cows by Stephen Higgins

Well, I’ve heard of ‘retro’, but this takes the cake. This novel is merely a thinly disguised re-write of a great 50’s movie of the same name. Oh, sure, Mr Wells tries to hide this fact by setting it in Victorian England, but come on… Oh well, I guess we should expect a lot more of this sort of thing. I should also point out that fans of Independence Day will also experience a sense of déjà vu whilst reading this novel. I’m sure Mr. Wells would argue that his work is a homage to the great invasion movies but there is a fine line between homage and cashing in.