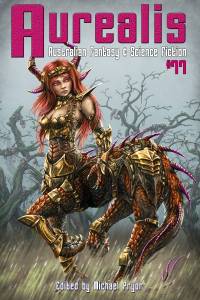 Aurealis #77 brings you ‘Like a Boojum’ by Simon Petrie where he takes us to a world where the exotic is familiar and the familiar is not to be trusted. ‘The Death of Glinda, the Good Witch’ by Rebecca-Anne C Do Rozario probes and questions until reality itself is in question. Lachlan Walter’s exploration of the often troubling amalgamation of SF movies and Western movies is illuminating and fun, while our regular roll-out of reviews has some important pointers to good SpecFic reading. Aurealis – not to be missed.

With Australia Day recently gone by, it prompts us to consider of what SF stories are still to be inspired by the Lucky Country. Here are some juicy possibilities we’re waiting for—or have we simply missed them?

Colonialisation and exploitation. Will the brutality and oppression of native inhabitants by external settlers be replayed on other worlds, or have we learned from the past?

Establishing a colony in a distant, exotic land. The experiences of our First Fleet and the early settlers provide many fascinating possibilities for SF stories. The personalities, the conflicts, the misunderstandings are a fertile field waiting to be sewn with an SF sensibility.

Ecological disasters through deliberate and accidental introduction of non-native species. If rabbits can ruin a continent, what could Terran species do to entirely new worlds?

Identity as part of empire. How does a far-flung colony develop a sense of independence while still remaining part of a widespread imperium? As for Australia and the British Empire, perhaps for galaxy-spanning empires?

The Colonial Abroad. Transfer an Edwardian Australian’s visit to the mother country to an SF context. Misunderstandings, under-estimations and questions of national pride are all waiting to be explored. Or perhaps a modern take? The 1960s experience of Australians fleeing a stultifying backward homeland to enliven a straitlaced mother country? Can we have an SF equivalent of Germaine Greer? Clive James? Barry Humphreys?

Exploration where the explorers are ignorant or dismissive of local conditions. Burke and Wills on an alien planet, anyone?

The past is often a rich vein to mine when it comes to SF stories. Australia’s past is no exception.

From The Death of Glinda, the Good Witch by Rebecca-Anne C Do Rozario

About Rebecca-Anne C Do Rozario

Hailing from Brisbane, Rebecca-Anne C Do Rozario became a university lecturer specialising in fairytales. She has published a diverse range of scholarly criticism and the odd knitting pattern.
:

Glinda reclined upon a ratty armchair under an afghan of rainbow coloured granny squares. She was in the middle of a turgid novel. It was about pig-tailed teenagers and toothless vampires in skinny jeans. She paused at ‘peaceful, pale perfection of his exquisite profile’ and rolled her eyes for the umpty-umpth time. Back at orientation, years ago, she’d fervently declined the invitation to join water aerobics. She would, she said, melt if made to gyrate in swimsuit and ear plugs. From that moment, the staff had joyously referred to her as ‘the witch’, distinguishing her from the ‘biddies’ and ‘bats’.

Simon Petrie (simonpetrie.wordpress.com) was born and raised in New Zealand, but has lived in Canberra for the past two decades. He's a member of the Andromeda Spaceways publishing collective, the Canberra Speculative Fiction Guild and the SpecFicNZ Core. His stories have appeared, sometimes without puns, in places such as Redstone SF, Sybil's Garage, Ticon4, Semaphore Magazine, Aurealis and ASIM,
:

Whenever we found one, it died.
We didn’t know how it did this, nor why. But it happened.
I wasn’t generally troubled by a beast’s death. I was used to it. Often enough, in fact, it was convenient. There are some things you just can’t learn about an organism while it’s alive, no matter the capabilities of your instruments: there’s a need for invasiveness, for cutting within, for disassembly of its constituent tissues, all in the name of understanding. In this situation—alien planet, limited timeframe—we were never going to hold back. We take our opportunities as they arise. (And on occasion, if they don’t arise, we make them.) But I’d never have said, before, that the idea of needful death, with the ultimate excuse of knowledge, could make me feel dirty about what we did.

From From the Archives: SF’s Sacred Cows by Stephen Higgins

This new novel from the English writer, George Orwell, sees him going in a new direction… backwards. 1984 is ostensibly set in the future, so, unless I’ve completely misread the book, it is set in an alternate past. Or it might be an alternate future’s past… or it could be just an alternate reality with a bodgy calender. For quite some time I was worried that the whole thing may have been the victim of a prodigious typographical error and it was supposed to be 2084, or 2184.

Lachlan Walter lives in outer Melbourne and is a writer/musician/amateur gardener who is fascinated by giant monsters and superheroes and the end of the world. He loves most things genre-related, all sorts of music and pottering in the garden. He recently completed his creative PhD, examining and writing Australian post-apocalyptic fiction.
: