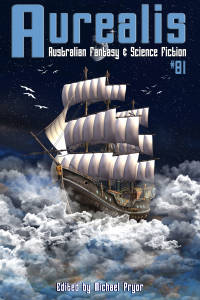 Aurealis #81 features horrifyingly plausible fiction from Dann Lewis and shiny tech-punk Mathew Russell, an insightful article from Lachlan Walter and an illuminating interview with the writer of the moment, John Scalzi. Plus all of the insightful reviews and news you need to know. Enough quality reading to last all the way through until the release of Issue 82!

Recently, Aurealis started thinking about how we could save the planet.

In the stately Aurealis boardroom, we tossed up between instituting a utopian regime and formulating a plan to maximise innate human potential without developing those really huge craniums when we realised we were surrounded by ceiling to floor bookshelves. That’s when it dawned on us that in many ways, we had already been doing our part in saving the world.

With the accepted science pointing out that we have an unfortunate rise in carbon dioxide levels and that these increased levels are responsible for an accelerating greenhouse effect that is bumping up global temperatures with some decidedly nasty outcomes waiting for us, it behoves us all to do something about reducing the amount of carbon dioxide floating around and doing its best to make us all miserable.

That’s why we have all this talk about carbon trading and carbon offsets and carbon sequestration—which is where we see our greatest contribution coming to the fore.

Carbon sequestration is generally thought of as pumping vast volumes of carbon dioxide into underground reservoirs, but it can mean locking up carbon in many ways—just so long as it doesn’t break down and become CO2 in the atmosphere.

Our answer? Gazing at the bookshelves, there it was. Books. Books are made of paper. Paper is made of trees. Trees are made of carbon (mostly). If we burn trees, that’s bad because it releases carbon. If the trees rot, it releases carbon (bad). But making the paper into books that sit on shelves all neat and protected, well, that’s locking up all that carbon for hundreds of years. It sits there, unspoiled, a handy carbon sink for posterity. Every book is helping, every shelf is of benefit. Every library is a vast world-saving lock-up, doing its best to keep up from the devastating effects of worldwide climate change.

Think about it. Buy books and save the planet. It’s your duty to do so.

From Spare Parts by Mathew Russell

Mathew Russell lives in Melbourne with his wife, far too many books and an obsession with Sci-Fi, Fantasy and Horror. He works in administration by day but spends most evenings writing when he should be sleeping. He loves technology and travelling, particularly to Japan, which probably explains his fascination with robots.
:

He could feel things broken inside of him and the sting of lacerations across his exposed flesh. His right arm was gone at the shoulder, shorn off by impact debris. The nano-machines in his body had cauterised the wound, sealed it off as soon as the arm had gone but he’d still lost enough blood to feel weak.

Byron breathed: in and out slowly to bring his nerves down. It wasn’t an impossible situation. He refused to believe anything was impossible. He just had to focus. Just had to work out a way to extract himself.

From Sprawl Rat by Dann Lewis

The night was like crushed velvet. It was never dark in the sprawl, the sky resembled a neon miasma on verge of eruption: a swirling vortex of advertisements and gaseous emissions pulsating in flux. It was the heartbeat of Shanghai2, and Jonny listened to the pulse as he whistled a jingle for Gnoccuni’s Pizzeria.

Jonny heard the broken English of a Nipponese modder, a cawing scrawl of messed up notes, jumbled with oriental trappings. Uneducated, his father would call the modder—but Jonny was not like his father and knew there was a certain skill to modding that only he could understand.

From Interview: John Scalzi Part One by Chris Large

Chris Large lives in Tasmania with his two wonderful kids. His recent work has appeared in Andromeda Spaceways Inflight Magazine, Damnation and Dames (Ticonderoga Publications), and is upcoming in Stupefying Stories and A Killer Among Demons (Dark Prints Press). He’s currently completing an MSc while intermittently exploring for gold in Macedonia. His story ‘The Red House’ appeared in issue #58 of
: