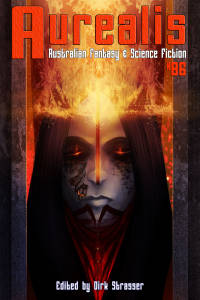 A few years ago, one of the major banks in Australia ran a series of advertisements that featured time travel. It involved a number of people meeting their future selves and being congratulated by them for wise investment decisions they had made. These advertisements annoyed me intensely. It took me a while to work out why I was reacting so strongly. I finally came to the conclusion that they irritated me so much because I felt that the speculative fiction genre was being sullied by being used by large corporations to manipulate people for commercial gain. Time travel is one of my favourite sub-genres and to see its emotional impact and resonance being used to increase bank profits was offensive.

I’ve since come across speculative fiction tropes and references everywhere in the general media. I’ve seen articles in the financial pages of major newspapers referring to ‘my precious’ in relation to market motivations and ‘winter is coming’ in terms of a slide in economic indices. Really? Is that what the power of fantasy and science fiction should be used for? To comment on the Dow Jones index?

I guess we should be flattered. The Eye of Sauron is now everywhere. Speculative fiction was once seen as a ghetto—a glorious golden ghetto, but a ghetto nonetheless. A place where outcasts eked out an existence. A dark corner for the literary impoverished, the room under the stairs for the writers and readers who couldn’t breathe in the mainstream.

That has all changed. Speculative fiction has transformed into humanity’s overarching narrative. Our genre has not just become the mainstream, it is now the prism through which the world is seen.

Something odd happened to popular culture somewhere around the turn of the millennium… somewhere around 2000 a shifting of the tectonic plates occurred. The great eye of Sauron swivelled, and we began to pay attention to other things. What we paid attention to was magic… Fantasy wasn’t a fringe phenomenon anymore. It had become one of the great pillars of popular culture and, increasingly, the way we tell stories now.

Maybe we should be cheering that we’ve won, that we’ve cast our spell over the muggles and they now all see what we’ve always seen. And yet, somehow I feel if we’re not careful we’re in danger of being subsumed by corporate wraiths who want to use the magical power for their own evil ends. To make all of us do things we wouldn’t otherwise choose to do. To cast a spell to sell their products. To make us believe things that aren’t true.

Let’s be vigilant and call out when speculative fiction is being used to manipulate. The genie might be out of the bottle, but hopefully we can find the right words for the spell to shove it back.

From Potkin by Janet Haigh

Born and raised in the wilds of Tasmania, Janet Haigh cut teeth on convict bricks and old, dark forests.
:

Thick, black soil wedged under her nails like cake. Shards of dinnerware, weathered glass and terracotta littered the dirt between weedy carrots and slug-laced silverbeet.

Close up, against the high brick wall, the last arc of the sun was warm but the evening chill was already in Milla’s digging fingers and in any trace of shadow. The sleeves of her woollen jumper were damp and the smell of wood-smoke was settling over the street.

From Adrift on the Smoky Sea by Lachlan Huddy

Lachlan Huddy’s Bunyipslayer stories have appeared in Aurealis 43, 45 and 79.
:

It didn’t take long for things to turn ugly after Thomas dropped the map.

He crossed the longboat’s gunwale and set foot ashore, and the crumpled parchment fluttered from his pocket and settled face-up on the sand. Thomas let it rest just long enough for all to see before snatching it up.

From An Interview with Ann Leckie by Chris Large

Chris' work has appeared in Aurealis and ASIM, and in anthologies published by Ticonderoga Publications, Dark Prints Press and CSFG Publishing.
:

Okay, I’m gonna have to ask this question. I love your books, but what is it with tea? Is it just the obvious historical connection with brewed beverage-sipping imperials, or is there more to it than that? Because if I drank even half the amount of tea Breq consumed in a day, I’d spend a heck of a lot of time in the bathroom.

From Secret History of Australia: Hughie McBain by Stephen Higgins

Stephen Higgins has his own secret history.
:

Hughie McBain was wounded at every major battlefield in the French theatre of war. It was churlishly suggested, after his fifteenth visit to the field hospital, that ‘surely the Huns know what Hughie is made of by now’.

From Five Future Types of Crime by Daniel Thompson

Daniel Thompson is currently writing a science fiction trilogy and hopes someone else will read it someday.
:

Only—you’re not driving. The car drives itself. You’re speeding down the freeway at well over 100km/h. You’re minding your own business, perhaps checking the news, or even taking a nap.

The next moment however, you are rudely interrupted by a buzz from your phone (or whatever passes for communications by then). You don’t recognise the caller. The voice on the other end of the line is unfamiliar.