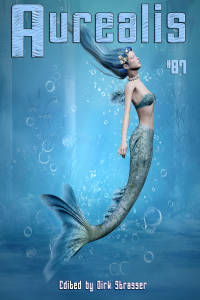 Visit Sean Monaghan’s ‘The Root Bridges of Haemae’, a resonant off-world story featuring a truly alien culture. Just when you’ve caught your breath from the breakneck hybrid that is Ian Bell’s ‘Elven Blades’, brace yourself for Deborah Sheldon’s nail-biting ride through the white wastelands of Antarctica, ‘Across the White Desert’.

Traditionally high fantasy has been the battleground between good and evil. At the centre of the conflict is the personification of the ultimate evil: The Dark Lord, the Shadow, Sauron, Morgoth, Voldemort, He-Who-Must-Not-Be-Named.  But the Dark Lord usually doesn’t engage in battle directly. He leaves this to his minions. Creatures born of evil are the Dark Lord’s foot soldiers: Orcs, goblins, Uruk-Hai, trolls and balrogs. And who usually lines up against them?  Humans. Often conflicted humans. People who are noble and brave, but also cowardly and corruptible. People who are wise but can also be foolish.  People who need to find the best in themselves to defeat the ultimate evil. It’s not hard to see why this sort of fantasy has come to dominate popular culture. Who can resist the ultimate battle? Who doesn’t want to see the Dark Lord defeated? The stakes are higher in high fantasy than in any other literature.

Serious problems, however, occur when the concepts underpinning the high fantasy battleground start to leach into real life; when the equivalents of Dark Lords and Orcs make their way into politics. In September 2015, former Australian Prime Minister Tony Abbott got himself into all sorts of trouble speaking about ‘different levels of evil’ when comparing IS behaviour with historical atrocities. That was on top of his analysis of the Syrian civil war as ‘It’s not goodies versus baddies, it’s baddies versus baddies!’

Of course, the prince of the high fantasy approach to real world problems was the US President George W Bush, when, in his State of the Union address, he first identified the ‘Axis of Evil:’ Iran, Iraq, and North Korea. He went on to make many high fantasy references during his presidency, including

‘We’re determined to fight this evil… We act now, because we must lift this dark threat from our age and save generations to come.’ 6 November 2001

‘Our struggle is going to be long and difficult. But we will prevail. We will win. Good will overcome evil… we are fighting evil, and we will continue to fight evil, and we will not stop until we defeat evil.’ 2 November 2001

‘This will be a monumental struggle of good versus evil. But good will prevail.’ 12 September 2001

In April 2003, the US Government passed up Iran’s proposed concessions, which included making peace with Israel, saying ‘We don’t speak to evil.’ Really? Iranians are evil? Created that way like Orcs, as a perversion of humanity by the Dark Lord?

History is littered with people who have done appalling things, totally convinced that they are right. The problem with treating people like Orcs is that it bestows the moral right to do absolutely anything to them. To be ruthless in unconditional certainty. No discussion. End of story.

But it shouldn’t be the end of the story.

We should all heed the warning sirens any time a politician starts talking about evil. Don’t let it go unchallenged. Real life isn’t high fantasy. It’s not hard to keep the two separate. None of us has been created by a Dark Lord. People aren’t Orcs. #PeopleArentOrcs

From The Root Bridges of Haemae by Sean Monaghan

Sean Monaghan's stories have appeared in Asimov’s and previously in Aurealis. He was the Grand Prize winner of the 2014 Jim Baen Memorial Writing Contest and co-winner of the innaugural Gernsback Amazing Stories contest in 2015.
:

Human females survive the birth of their children.

Ribolee ran this revelation around in her head again and again as she walked home from their camp.

And not only that, they sometimes have just one child. Imagine. A single child. How could that be? How could a species come to be with such a clear hindrance to its own survival?

From Elven Blades by Ian Bell

Ian Bell is obsessed with SF, fantasy and military fiction in equal measure. ‘Elven Blades’ is his first published work.
:

It was bright against the serviette in John’s hand—spattering across his face from the woman’s headless body. The barista, her right hand half-extended to refuse the serviette, was completely still as her head bounced off the wall.

The scene was stamped into John’s mind in that moment—the blood obliterating his phone number from the serviette. Blood rolled down the barista’s brown blouse and dripped onto the nametag pinned to her chest. Emily became Em as a droplet of blood splashed across it. Her head tumbled down to the ground with a slightly shocked expression amidst her tumble of brunette hair.

From Across the White Desert by Deborah Sheldon

Both of them were going to die. John knew this to be true. Every time he tried to mentally prepare, however, the goddamned soldier next to him on the dogsled kept arguing the impossible.

‘Circle back,’ the soldier said again. ‘Seven downed men: that equals seven field-packs with food, weapons and ammo. We need those supplies.’

John said, ‘Circle back? How? This is Antarctica, dickhead. No cover.’

The dogs sprinted over the snow, kicking up powder. John felt the muscular strength of each Siberian husky through the reins. His two other dog teams, their sleds now empty, kept pace alongside. Run, he thought, for the love of Christ, run. Those things still tracked close behind. Circle back? My arse. Didn’t the soldier understand? Hadn’t the dumb bastard witnessed that ambush out of nowhere; seen the massacre himself?

From Plain Speaking with Trudi Canavan by Chris Large

Chris Large is an Australian writer of science fiction and fantasy. His work has appeared in Aurealis and ASIM, and in anthologies published by Ticonderoga Publications, Dark Prints Press and CSFG Publishing.
:

Australian author Trudi Canavan won an Aurealis Award in 1999 with her first published story, ‘Whispers of the Mist Children,’ and hasn’t looked back. The Black Magician Trilogy, her first fantasy series, garnered international acclaim and she has since written The Age of the Five and the Traitor Spy Trilogy, along with standalone novel The Magician’s Apprentice. Her last five books have been Sunday Times bestsellers in the UK. Following the release of Angel of Storms, the second instalment in her Millennium’s Rule series, Trudi spoke with Chris Large about the new book, her detailed world-building, and the ways in which her technique has been shaped over time by experience and injury.

From Sky Politics: Nevil Shute’s In the Wet by Gillian Polack

Gillian Polack is a writer, editor and historian. She has four novels currently published, and her second novel Ms Cellophane (Momentum) was shortlisted for a Ditmar. She teaches writing at the ANU.
:

I tell people ‘I’m re-reading Nevil Shute’ and they say ‘Ah, A Town Like Alice.’ I say, ‘No, his science fiction’ and they say, ‘Ah, On the Beach.’ But On the Beach wasn’t his only SF novel.

From Secret History of Australia: Clifford Menelaus by Michael Pryor

Michael Pryor's fiction moves from literary fiction to genre Science Fiction to slapstick humour, depending on his mood. He has been shortlisted six times for the Aurealis Award and nominated for a Ditmar.
:

Clifford Menelaus was the youngest son of Archie and Lois Menelaus, well-known Melbourne academics and ne’er-do-wells. His three older brothers all joined the military—two eventually captaining destroyers in WWII and one being cashiered for ‘reckless buffoonery’ while starring in an army pantomime in 1935.