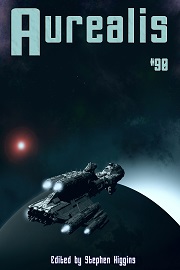 Beasts, death and deep space…and much, much more.

If you read a given publication for long enough, you will eventually come across the famed ‘What will I write about’ syndrome that infects editorials, opinion pieces and general articles across all genres. This isn’t one of them… Honest. I have tons of things I could write about. But in trying to choose from one of the hundreds of topics that I have to write about, I thought I would write about something close to the heart of all of our contributors, and of interest to all of our readers. That topic is writing. Specifically, how do you generate ideas? ‘What will I write about?’

In terms of fiction, I haven’t written anything of note for years. I don’t really want to find out how many years, but trust me it has been a long time. During that time, I have taught creative writing at high school level which is akin to dentistry at times (getting words on paper is like pulling teeth) and I have sagely advised students on how to get ideas, generate characters etc. All the while I have totally ignored my own advice. Until now.

I had an unfinished novel sitting in a file somewhere, and let’s face it, don’t we all? And I had a look at it and realised that I was kidding myself about it being a novel. It wasn’t. It was a short story with various bits and bobs bolted onto it. So I undid the bolts, had a look at the core idea, and wrote a short story. I am hoping that will be released into the wild soon. Anyway, as I am always telling my students, you get ideas when you write. As I wrote, I came up with four ideas for other stories. Three of them are rubbish. I have just completed one of the others. And as I wrote THAT one, I came up with two more ideas for stories, and if I am honest, only one of those is worth pursuing. But… I might be able to combine one so-so story idea with the other just-ok story idea and come up with something. Of course it might just be a case of combining two dud ideas and still ending up with not much but you never know.

I guess the main thing I want to say is that it is nice to be writing again. And I am confident that I will be able to keep it up. So to all of you people out there writing away and hoping to get published in Aurealis… I feel your pain. But keep going!

From The Beasts and the Birthday by Marlee Jane Ward

Marlee Jane Ward is a writer, reader and weirdo from Melbourne, Australia. She attended the Clarion West Writers Workshop in 2014. Her short stories have been published in Interfictions, Terraform, Mad Scientist Journal and the Hear Me Roar Anthology.
:

Nanny’s forever going on and on about what things were like before the march, when there was so much. Whose got carrots enough to throw bits of them away? Mumma and Daddy though, they don’t say a word about it, or the march itself. Neither of them say much at all, really. Me? I wasn’t born before but during, and I don’t remember none of it. Polly says she can recall a few things here and there, flashes of the beasts, the way they sunk their teeth in at the necks and made people into puppets. When she tells me things like that, I’m glad I don’t remember.

From Death and Mildred by Nick Nedelijkovic

Nick Nedeljkovic is a Sydney-based writer who collects fantasy books and university degrees. His work has been published in Voiceworks magazine and longlisted for the inaugural 2012 Guardian Hot Key Books Young Writers Prize.
:

Mildred was only six when she met Death, but she wasn’t afraid.

He looked nothing like the pictures. He wasn’t a skeleton in a dark robe or a gaunt figure wielding a shining silver pennant (she hadn’t yet learned the word scythe). Instead he wore a ragged but serviceable coat and carried a leather briefcase, and looked a little bit like her father and grandfather and Mr Makras, the lion-voiced librarian at her school, all rolled into one. If Mildred had ever known her mother, Death might have looked a little something like her too.

From Drift by Alex Hardison

Alex Hardison is a resident of Sydney who originally hails from Perth, and followed the local tradition of leaving as soon as possible. After living in London for a year he has settled in Sydney to pursue twin careers in writing and IT, as well as an obsessive love of comics.
:

What happened to the ship wasn’t my fault. At least, I don’t think that it was. Things like that are hard to work out in the moment.

My last clear memory is of working on the exterior, the humans crowded safely inside. They always felt so distant, locked down in the dark with the warmth and oxygen. It was better, out on the hull. Moving quickly and gracefully, all six limbs planting temporary rivets and pulling me along. It’s what I was made for. The humans were shouting at me to move faster, to fix the damage. I didn’t know what had gone wrong with the ship, but that was okay. Fixing things is what I do. They were insulting me, their voices high and thin with panic. So fragile and so strange

From The Opposite of Romance by Chris Large

Chris is an Australian writer of science fiction and fantasy. His work has appeared in Aurealis and ASIM, and in anthologies published by Ticonderoga Publications, Dark Prints Press and CSFG Publishing.
:

Part one of an entertaining and enlightening interview with Jennifer Fallon.

Daniel Thompson is a uni student living in Melbourne. He is studying law, but would much rather be flying around the galaxy fighting aliens instead.
:

Nobody remotely interested in space will have failed to notice the headlines that pop up every few months about the latest discovery of a ‘potentially habitable planet’—’Hey look, we found a planet only twice as large as Earth, possibly orbiting in the habitable zone, that’s only 400 light years away!

From Secret History of Australia by Michael Pryor

Michael Pryor's The Laws of Magic series was short-listed for the inaugural Sara Douglass Award for book series.
:

Intellectual, freethinker and solipsist, Cyrus Handapple was the youngest in a family of fifteen, born in 1904 and growing up in the Western Australian town of Bunbury.