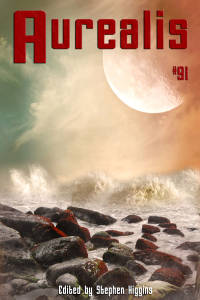 Aurealis #91 is out now! It is full of fiction, reviews and interviews and all sorts of wonderful stuff!

I’m reading the greats. Michael Pryor gave me a few Robert Silverberg novels and I am ploughing through them. The great shame about the decline in the numbers of bookshops has meant that there is a steep decline in the visibility of the SF backlist. As more and more people access ebooks, the problem gets worse. Unless an old… sorry, established author has just had an old novel become the subject of a major release film, they just don’t appear on iBooks. You really need to search hard to get a hold of the significant works from way back then. Unless you happen upon reviews of various authors and you feel inclined to read reviews of ‘old’ novels, you miss out.

Take Robert Silverberg. Many of his most significant and highly regarded works were first published in the 70s. Of course he has produced some wonderful and valuable work since then, but that was when he really hit his straps. Silverberg is not just prolific; he is immensely talented. The only reason Michael gave me his books was that we had a discussion about well-known authors we had not read, and he was my contribution. Both Michael and Dirk Strasser thought I should read him, and I value their opinions. After a couple of short novels, I did wonder why Silverberg had escaped my attention. Oh I know about him and his reputation, but I had not read a single word of his. My loss, belatedly rectified. I can heartily recommend him. Try The Book of Skulls or Downward to the Earth. There are many others, in both fantasy and science fiction, but these are the ones that have impressed me so far.

Why not investigate some authors for yourselves? We all know the names Asimov, Clarke, Dick, Aldiss, etc etc. Find out why we all know them.

From Skin Deep by Ika Koeck

Born Malaysian with a hint of a Dutch bloodline, Ika Koeck’s passion for writing began when she was twelve after an accidental encounter with a fantasy novel left her mind reeling with ideas. Her short stories have appeared in Ages of Wonder, an anthology published by DAW books and The Apex Book of World SF 3
:

It was not the prolonged silence that followed that troubled him. It was the way his uncle’s jaws moved, as though he was biting down a curse. Stian’s face had settled into the same expression he would wear when he sighted a storm in the distance or knew a fight was about to break out in the tavern. ‘I was worried you wouldn’t have anything to show your father,’ Stian said at last. He scratched his bearded chin while the leopard looked on, her tail swishing.

From Stern Daughters by Imogen Cassidy

Imogen Cassidy is a Sydney-based mother of two, who sometimes gets the time to write speculative fiction. Her stories have appeared in The Colored Lens, Devilfish Review and in the Year's Best Australian Fantasy and Horror, as well as Aurealis
:

Coming to consciousness was like swimming to the surface of a dark, deep lake. I was aware that there was a goal—the light and air of the awakening, and there was some joy in the knowledge of what came with achieving it, yet there was an underlying sense of panic also.

From Why I Hate Tuesdays by Carl Purcell

Carl Purcell is a fan of all things strange and fantastic, a pathological day-dreamer, and a Sydney-based author of two contemporary fantasy novels and co-writer of the popular Australian comic series 'Winter City'. He believes one day the world will come to appreciate his comic genius as much as he does. You can find his numerous mad ravings and thoughts on life at carlpurcell.blogspot.com.au.
:

I know a lot of people hate Monday.

Personally, I don’t mind Monday. I guess people resent Monday because it means their weekend is over. When I have the weekend off, there’s never anything interesting happening. That’s because I’m purely nocturnal. Not by choice, it’s just a side effect of my job. But because I sleep all day, I miss out on all the fun things people do during the day and because my roommates aren’t nocturnal, anything I do I have to do quietly. For me, a night I’m not working is just a night spent searching for new and interesting ways to waste time. After that, it’s almost a relief to be back at work the next night. Unless it’s a Tuesday.

From Dark Fantasy Versus Horror: Why Are Their Differences Important? And Which Genre Should You Introduce to Your Children First? by Claire Fitzpatrick

Claire Fitzpatrick is an author, poet, and journalist. Her debut novel Vinyl about Australian nurses and political protesters in the Vietnam War is in the editing stages of publication. Her work has featured in The Leveller, Student View, The Cortex, Midnight Echo, and previously in Aurealis #88. Her short horror story 'The Devil & The Grotesque' will be published in The Refuge Collection Volume 5
:

It’s a question that stumps a lot of writers, and indeed a lot of readers. What’s the difference between dark fantasy and horror? There has been a lot of debate and discussion on the topic, but why does it really matter? And why is it okay for children and teenagers to read dark fantasy, but not horror?

From Death Rides a Pale Horse Called Binky (but not in my books): An Interview with Jennifer Fallon (Part 2) by Chris Large

With twenty three novels under her belt, including the recently released The Lyre Thief, Jennifer Fallon is one of Australia’s best-loved fantasy authors. After moving to New Zealand one might be forgiven for thinking she’d switched to the slow-lane. Nothing could be further from the truth. Between her day job as an IT consultant to Antarctica New Zealand, her writing, and the Christchurch earthquakes, Jennifer’s life has been anything dull. In this second part of our interview (find the first in Aurealis #90) we discuss gods, Death and Fifty Shades of Grey