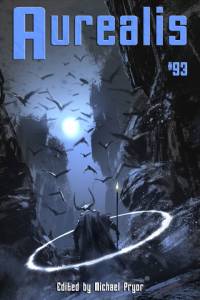 Aurealis #93 contains features the atmospheric and evocative ‘Always’ by Si Wang, Meryl Stenhouse’s elliptical and allusive exploration of the connection between past times and today, and Michael Johnston’s ‘The Trees’, where the darkness abides. We also have Chris Large’s fascinating interview with Francesca Haig, author of ‘The Fire Sermon’ – plus reviews, outstanding art and more.

As readers, we love a good title. Something that’s evocative, maybe mysterious, preferably tantalising, will help me pick up a book. As writers, aware of how a good title can influence reader choice, titles are a distinct challenge. The pressure to come up with a good one, the consequences of settling on a dud… Sometimes we wish all books were released with just author name, some sort of identifying number and a really snappy cover illustration.

In our experience, titles tend to fall into categories. (Note: categories aren’t mutually exclusive. Nor comprehensive. And they’re probably a bit arbitrary, but never mind.)

Category 1: Descriptive Titles. Example: ‘The Mystery of The Screaming Clock.’ With this, we know we’re going to get a mystery and we know somewhere there’s going to be a noisy timepiece. Ah, Jupiter Jones, where are you now?

Category 2: Cryptic Titles. Example: ‘Catcher in the Rye.’ We’re not going to pick this one up expecting some sort of treatise on occupational health and safety in cereal crop related industries, but what the heck IS it going to be about? Must buy, must read…

Category 3: One Word Titles. Example: ‘Capricornia.’ These can border on cryptic (see above) but have the virtue of brevity. We recommend that if you choose a one word title, it had better be a good word.

Category 4: ‘The’ Titles. Example: ‘The Corrections.’ ‘The’ titles can sound nice and definite, as if you know what you’re talking about. This is usually a good thing in an author.

Category 5: Gerund Titles. Example: ‘The Shining.’ As for ‘The’ titles, above—plus these titles can give a sense of ongoingness, which we’re sure is a word. A Gerund Title suggests that the events of the book can keep going, even when you’re not reading. Sort of like jogging on the spot. This can be reassuring for a slow reader.

Category 6: Possessive Titles. Example: ‘Captain Corelli’s Mandolin.’ Nothing says ‘quality fiction’ like a title that follows the formula ‘X’s Y.’ It implies intimacy, closeness, ownership, like owning this book you’ve just picked up in the bookshop.

Category 7: Quote Titles. Examples: ‘To Your Scattered Bodies Go,’ ‘Brave New World.’ Okay, so you know your Donne. Or your Shakespeare. Or your Wordsworth. But do you really want to give another writer a plug on the cover of your book? Remember: it’s dog eat dog out there.

Category 8: Uncategorisable. Example: [This is where you can fill in the exception you were thinking of while you were nit-picking at Categories 1–6.]

From Always by Si Wang

Si Wang is a science fiction and fantasy fanatic. He lives in the Bay Area of the United States with his wonderful wife and energetic Labrador.
:

Yon Unflag trudged towards the town of Two Bones, following the black road of the Old People and bearing two wooden crates tied to opposite ends of a bamboo pole. The pole, as thick as an arm, bent in a half circle across Yon’s shoulders. Although a giant of a man, Yon grunted under the weight. As he crouched down and let the crates settle to the ground, he felt his knees crack. He rubbed his bruised and sore shoulders. The sun bore down on him and the heat gathered under his black hood and mouth mask, but he did not dare take them off. Someone could be watching. With his sleeve he wiped the torrent of sweat pouring down his face.

Meryl Stenhouse lives in subtropical Queensland with her family, a weed-infested garden and far too many characters. She has been a research scientist, call-centre operator, auditor and environmental officer but now prefers just writing fiction. Her stories have appeared in Shimmer, Shock Totem, Extreme Planets, Space and Time Magazine and A capella Zoo. Meryl Stenhouse is an author of short-to-me
:

Air Berlin lost my luggage, but found it before it went to Rome, and so I have, finally, arrived in Corfu. Corfu town is like something out of the more exotic medieval travel literature, and smells like the eighteenth century, too. Glad I checked the hotel had Wi-Fi before I booked, because my mobile reception is rubbish.

From The Trees by Michael Johnston

For the past year I have been living in the central coast, commuting between the beach and the city for work. I have had a number of small works published in online magazines and competitions.
:

The man returned, his arms full of wood. He began to arrange them on the ground. Behind him, the sun was sinking beneath the trees.

She sat, reading in the twilight, as the man readied the fire, leaning the sticks atop each other to make space for air to circulate. Soon the fire was burning and the sun had set. The man held two skewered mice, turning them carefully over the fire. Around them, the woods were dark and quiet. Their edges did not touch the light.

‘Papa, there are no wolvas tonight.’

From Light in Dark Places: An Interview with Francesca Haig by Chris Large

Francesca Haig grew up in Tasmania and has since made her mark as a poet, an academic, and lately as a novelist. Her first book, The Fire Sermon, is a post-apocalyptic tale set in a world in which everyone is born with a twin. One twin, the Alpha, is a perfectly-formed human specimen. The other, the Omega, bears the burden of radiation-induced genetic mutation. Dreamworks have optioned the rights to the film and Nicole Perlman (of Guardians of the Galaxy) is adapting the first novel for the big screen. Following the release of her second book, The Map of Bones, I spoke to Francesca about the ideas behind this excellent series.