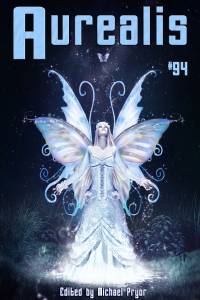 Aurealis #94 is a very special issue, with top quality fiction from Emilie Collyer, Matthew R Ward and Jen White, stories that range from the poignant to the rambunctious and back again. Look out, too, for insightful non-fiction, with Lachlan Walter on Climate Change Fiction and Gillian Polack’s exploration of the work of Mary Elwyn Patchett. Plus reviews, laughs and more. Aurealis #94—found in all good homes.

From Danger to Society by Emilie Collyer

Emilie Collyer has a lifelong obsession with creating imagined worlds. She splits her writing time between fiction and theatre. Her stories have been published in Dimension6, Allegory, Cosmic Vegetable, Torpedo, and Thirteen Stories among others. She has two collections published with Clan Destine Press and has twice won the cross-genre category in the Scarlett Stilettos. Her sci-fi play The Good
:

‘This is Cat Zenith, about to step outside for my very own Moon landing. One small step for woman. One giant leap in these awesome red boots—check these babies out!’

Cat moved her palm camera down to capture her boots, then back up to her face. She did a quick thumbs-up before securing her helmet. There was no need to land on the actual surface of course. They could have docked at the GAF landing bay. But Cat knew what made good television. Her suit was by Gaultier Galactic and looked fabulous. They touched down at the Sea of Tranquillity, not far from where the first manned moon landing had taken place the previous century.

Matthew R Ward is a Yorkshireman who moved to Australia when he discovered that sunshine feels nice. He has written magazine articles, songs, a self-published web-comic and a number of critically acclaimed shopping lists but this is his first professionally published short story. Matthew has never attempted to surf and doesn't think it would be a good idea to start now.
:

I spotted Baz sitting on the low wall that separated the beach from the real world. He was gazing out over the ocean into the remains of the sunset. The sky was a slowly darkening pink spattered with clouds turning a deep shade of gold.

‘Hey, Bazza! Baz! What happened to you?’ I waved as I called out, but Baz didn’t respond. I slid down onto the wall next to him and studied the golden sea for a moment, listening to the waves sliding softly up and down the sand and enjoying the taste of the salty air on my lips. ‘Baz, where were you? You missed the surfing final!’

From The Least of Things by Jen White

Jen greatest desire growing up was to become an astronaut and eventually owning her own spaceship. Somehow she became a writer instead. Jen lived for some time in the Northern Territory and now lives in country Victoria, finding inspiration in the vibrancy and mystery of the Australian environment. Jen’s stories have appeared in magazines such as Andromeda Spaceways Inflight Magazine and Dimension
:

April had not meant to say much at all, not about anything personal, at any rate. She had only gone in for blood pressure tablets, something she did every few months. But it had all spilled out, embarrassingly, with merely one questioning look from Irene, her doctor, as if somewhere within she had been awaiting an opportunity, any opportunity, for it to pour out of her. Unable to find the motivation to buy food, to cook, April had hardly eaten for days. When she wasn’t working, she slept. Could barely concentrate enough to read one page. She, who had easily managed two books a day in her prime. Or perhaps it had been the photographs in the surgery of Irene’s son and daughter, two primary school-aged children in their uniforms gazing out at the world with an eagerness that was heartbreaking. Such hope, such belief, shining in their eyes. How was that possible? Had she ever felt that? And out it had all come.

From Apocalypse Soon-ish: Is Climate Fiction the New Black? by Lachlan Walter

Lachlan Walter is a writer and nursery-hand (the garden kind, not the baby kind), and has completed a PhD that critically and creatively explored the relationship between Australian post-apocalyptic fiction and Australian notions of national identity. He writes science fiction criticism for both Aurealis magazine and its offshoot blog, reviews for the independent ‘weird music’ website Cyclic Defro
:

It is unarguable that science fiction is intimately connected to the real world. Now, this may seem like a contradiction—one of the defining features of the genre is that its worlds are expressly disconnected from our own, be they via futuristic settings, uber-advanced technology, or a combination of the two – but as the renowned science-fiction critic Heather Urbanski said: ‘science fiction is the literature of the reality we live in.’ However, this ‘reality we live in’ isn’t always merely connected to the work of science fiction at hand, but can also be commented on, in a process similar to that of realist fiction (think of Joseph Conrad’s Heart of Darkness and colonialism; or Jack Kerouac’s On the Road and the Beat Generation; or Christos Tsoilkas’ The Slap and 21st-century Australian life).

From Brumby Adventures in Space: the Science Fiction of Mary Elwyn Patchett by Gillian Polack

Gillian Polack is a writer, editor and historian. She had four novels currently published, and her second novel Ms Cellophane (Momentum) was shortlisted for a Ditmar. She has edited two anthologies and has seventeen short stories published (some to very mild fanfare, some not). She teaches writing at the ANU, at various Writers’ Centres and to members of other professional writers’ organisations a
:

One of the most prolific of the professional Australian science fiction writers before 1970 is better known for novels about bush adventures than for her science fiction. Her brumby books—like those of Elyne Mitchell—still have an international following. Typical of these books are The Brumby (1958), Come Home Brumby (1961—which was my own introduction to her novels) and Ajax and the Haunted Mountain (1969). Yet, of Mary Elwyn Patchett’s fifty-four novels, at least seven were science fiction.