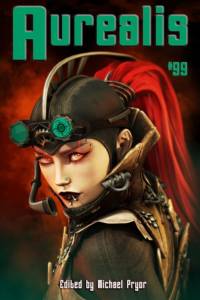 Aurealis #99 is another gold standard issue with the action-packed ‘Agents of Empire’ from Aaron Emmel, the cool and cinematic ‘Once Was Lost’ from Alan Baxter, the poignant ‘Regulation’ from Michael Earp, the thoughtful exploration of classic Australian genre storytellers in ‘Creating our own stories’ from Gillian Polack while Chris Large and Russell Kirkpatrick combine for ‘Cartogramancy–On The Art of Fantasy Map-making.’ And don’t forget our red-hot Reviews section, sensational internal art and more. Aurealis – it’s the real thing.

As an SF magazine, Aurealis is much concerned with the future and, more to the point, imagining the future. Here are five great books that do just that.

Neuromancer—A cool future. William Gibson took film noir and mashed it with computer culture and created a future that has dominated visions ever since, with violent and amoral characters caught in vast conspiracies. With its first sentence ‘The sky above the port was the colour of television, tuned to a dead channel.’ future imaginings would never be the same. Tense and gritty.

Snow Crash—A corporate future. The world is owned and operated by businesses and entrepreneurs, the internet has become the all-subsuming Metaverse and the distinction between reality and the virtual world has all but disappeared. An ancient Sumerian god reappearing as a computer virus? Why not? Neal Stephenson is eclectic, challenging and erudite. Wild and hilarious.

A Civil Campaign—A human future. Part of Lois McMaster Bujold’s Vorkosigan saga, this is a comedy of manners in a future where humanity roams the galaxy. With its plots, trysts, intrigues and misunderstandings it could be Austen in the Future, with extra politics and diplomacy. It’s sharp, witty, full of endearing and engaging characters, and with a narrative that takes in espionage, betrayal and romance. Intricate and rewarding.

The Mars Trilogy (Red Mars/Green Mars/Blue Mars)—An ecological future. We sneak this in as one book, because Kim Stanley Robinson’s future is a rigorously imagined one, where the politics and ethics are as much part of the story as the nitty-gritty of colonising another planet. Gripping and thoughtful.

Always Coming Home—A blighted future. Ursula K Le Guin gives us an almost anthropological treatise examining what humanity might become after the collapse of civilisation due to an unspecified series of disasters. Lyrical and absorbing.

From Once Was Lost by Alan Baxter

Alan Baxter is a British-Australian author who also teaches Kung Fu. He lives in NSW, Australia, with his wife, son, dog and cat. He’s the multi-award-winning author of several novels and over seventy short stories and novellas.  Read extracts from his work at his website – www.warriorscribe.com – or find him on Twitter @AlanBaxter and Facebook.
:

Stuart’s appearance beside me is a shock, and he seems to have no idea he’s dead. Clearly I’m losing my mind. The chameleon suit beneath the maintenance overalls tightens as it reads adrenaline pulsing through my system, sensors expecting fight or flight any moment. Deep breaths settle my momentary panic, and the muscle-support constriction eases.

From Regulation by Michael Earp

Michael Earp is the manager at The Younger Sun Bookshop, he studied Early Childhood Teaching and did his Masters in Children’s Literature. His thesis focused on Young Adult literature in Australia. He also has established the #AusQueerYA tumblr to coincide with the #LoveOZYA campaign, of which he is the current committee chair. He blogs at www.michaelearp.net
:

We tuck our legs under the bench and lean back against the bricks, struggling to suppress ourselves. The hallway goes quiet.

His impression of Mr Althaus was the perfect mixture of no personality and too much passion for maths. He stopped just in time. Mr Althaus himself is walking down the hall.

From Agents of Empire by Aaron Emmel

Aaron’s stories have appeared in sub-Q Magazine, Jitter, Riding Light, Every Day Fiction, and other publications. His interactive science fiction gamebook The Midnight Legion: Operation Deep Sleep, a collaboration with artist C. Aaron Kreader, was published in 2016. He lives with his wife and two children in Maryland, USA. Find him online at www.aaronemmel.com.
:

Gene watched the assassin emerge from the airlock and fell into step behind him. The stranger was dressed in a reflective charcoal jacket and carried a hard shell suitcase. He strode with purpose, his sharp gaze absorbing his new surroundings. He entered the Gold Concourse and Gene followed, keeping his distance, tracking his movements from the corner of his eye. The man turned down a side corridor and Gene quickened his pace.

In an enclosed community like Neptune’s it was easy to identify the enemy’s agents. The assassin had departed Baltimore Spaceport under an assumed name. Inquiries in the Stream were routed to a fabricated biography. His passage had been booked by an organisation that kept no public records.

From Creating Our Own Stories: Cusack, Kiddle and Chauncey by Gillian Polack

Gillian Polack is a writer, editor and historian. She had four novels currently published, and her second novel Ms Cellophane (Momentum) was shortlisted for a Ditmar. She teaches writing at the ANU, at various Writers’ Centres and to members of other professional writers’ organisations. www.gillianpolack.com Facebook: Gillian Polack Twitter: gillianpolack
:

Sometimes, science fiction and fantasy novels are written by unexpected writers. Sometimes a writer of naturalistic tales will delve into something more mysterious. Sometimes a literary writer will fall into fairyland. I would like to explore three authors and three works, all of which are tangential to the authors’ careers and all of which fall loosely within the realm of speculative fiction. They remind me that folklore is but a hop and a step away from fantasy and that narratives don’t always fit into neat categories. They also remind me that it takes more than mimesis to create a national literature.

Dymphna Cusack (1902–1981) is more known for novels such as Come In Spinner than she is for fantasy fiction. Her novels are gritty tales of the harshness of life and, like many Australian writers of her time, underpinned by firm political convictions. After nearly a decade as a published author, she wrote a children’s book. Kanga-Bee and Kanga-Bo was published in 1945 and is a fairytale… of sorts.

About Chris Large and Russell Kirkpatrick

Chris is an Australian writer of science fiction and fantasy. His work has appeared in Aurealis and Andromeda Spaceways.
Russell Kirkpatrick is a New Zealand-born author whose epic fantasy novels are published by Harper Voyager and Orbit.
:

As a kid I loved looking at old maps, and the easiest way to recreate something resembling an aging treasure map was to follow the above recipe to get that ‘old-parchment-look’. This was long before my parents owned an espresso machine, so the coffee was instant and the results unpredictable. Once the paper had dried and I’d inked the detail I was after, I would either darken the edges a little, or singe them with a candle (because what treasure map worth its salt hasn’t inexplicably survived a raging inferno?). Often I’d even rub the base of the candle back and forth over the map on a hard surface to cover it in wax and give it that slick, water-proof sheen I imagined old pirate maps would have.

I loved maps so much I studied geography—and even a bit of cartography—at university, before ending up in geology. As a geologist I’ve drafted many maps—geological, geophysical and geochemical. It seems as though, no matter what I do, maps will always be a part of my life.