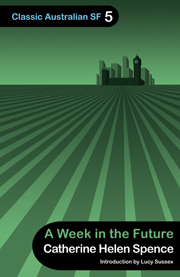 Classic Australian SF 5: A Week in the Future

by Catherine Helen Spence (with an Introduction by Lucy Sussex)

Emily Bethal is dying. The doctors give her two years at best. It will be two years of increasing pain and dependence. It is probably the dependence that Emily fears the most. She is independent, spirited and wilful. She has strong opinions and she knows the way the world works … but she also knows how it should work. Is the deal worth it? Yes, she will avoid the two years of suffering and has traded it for for one week of living in the future. And the future she will see? The bright shiny wonderful and miraculous world of 1988. Yes 100 years into her own future takes her back to our recent past. See the wonders that Emily sees as she experiences a world that she just knows must exist for the betterment of all man … and womankind.

I had hoped to have seen some outcome from the groaning and travailing of all creation, and from the efforts of so many earnest and devoted men and women for the amelioration of the conditions under which the toiling masses live and labor. What will come out of Irish Agitation, German Socialism, Russian Nihilism? Will India be prepared for self-government? Is the mighty Chinese Empire really awaking? When and how is the barbarous practice of war to be abolished? Is the scarcely less deadly war between labor and capital to end peacefully, or is the cut-throat competition for cheapness all over the world to be ended by a terrible and destructive catastrophe? Is religion to become more Catholic or more sectarian? What is a year or a problematical two years of life, wrapped up in cotton wadding, to my eager questioning soul? I would give the year or two of life you promise me for one week in the future. A solid week I mean. Not a glance like a momentary vision, but one week — seven days and nights to live with the generations who are to come, to see all their doings, and to breathe in their atmosphere, so as to imbibe their real spirit.’

‘How far in the future should you like to spend your solid week — twenty years, fifty years, a hundred years hence?’ said Dr. Brown, with a curious expression on his intelligent countenance.

‘You know, Florrie, I have often said to you and to other people that I would give anything to see the world fifty years after I left it, but as I am not to live such a long life as my mother’s by thirty-five years, and not even the Psalmist’s measure of three score and ten, and as the changes that have to be wrought may take a long time, I think I should prefer a hundred years to elapse before I see my week in the future!’