Zenith: The First Book of Ascension 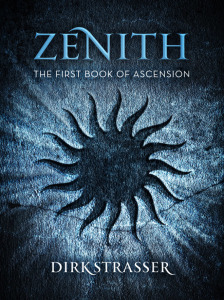 The world of the great Mountain is unstable. Giant pillars erupt from the surface and yawning chasms form unpredictably underfoot. Since the Maelir first stood on its slopes in the distant past, they have sought to still its anger and control its power. Each year, twin brothers are chosen to make a perilous journey to the summit. If they survive they will be witness to Zenith, and the secrets will be revealed to them.

When Atreu and Teyth embark on their Ascent, their Talismans lead them onto conflicting paths that will ultimately set brother against brother. And this time the Ascent itself is in peril as unknown forces that have long craved the power of Zenith will stop at nothing to make it their own even if it means destroying the very thing that sustains all life the Mountain itself.

‘We’re not safe yet,’ said the windrider. ‘With you weighing me down, it’s hard to fly high enough to get out of reach of the arrows.’

‘The Faemir. We had some warning, but it wasn’t enough. The Felsen don’t have a chance. They won’t leave their monastery.’

Atreu watched another arrow fly past his face. It embedded itself in one of the windrider’s wings. There was a sudden jolt.

‘Are you all right?’ Atreu’s voice sounded thin even to his own ears. He tried to look down and immediately felt giddy.

The windrider grunted a reply.

Atreu glanced up at the arrow stuck in the left wing. ‘Are you in pain?’

The windrider almost laughed. ‘What do you think I am – a bird? Of course I’m not in pain, but a few more arrows and we’ll both drop out of the sky.’ He shifted slightly and Atreu could feel the wind rushing past his ears. ‘Here, hold onto this – my arms are getting tired.’

The sun started to appear from behind the cliffs, and the snowfall was not quite as heavy. Atreu forced himself to look down. The giddiness returned but he fought it, and soon the ground below stopped swirling.

He could see the dull glint of swords, knives and axes against the white carpet of snow. The lights of Crosanct were fading now that the sun had begun to rise. There were soldiers and Faemir clashing everywhere, though from Atreu’s height they were often indistinguishable. Other windriders swooped and dipped through the air below them.

‘Even when I get you through the Pass, you’ll have to be careful,’ said the windrider.

‘Did you hear me?’ asked the windrider.

‘Yes,’ said Atreu. Now that the fear had receded, a wave of euphoria swept through him. I’m flying!