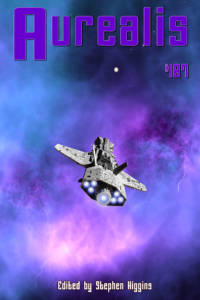 The first issue for 2018 has arrived! Aurealis #107 has fiction from  J. M. Donellan, Joanne Anderton and Jordan Taylor as well as reviews and non fiction.

I’m afraid I have reached that point where I am getting very hard to please when it comes to reading speculative fiction. Short fiction isn’t a problem I hasten to add. I get plenty of reading pleasure just looking at stories for Aurealis, however, I have been going through a phase where I have been searching for new authors to add to my novels reading list and there is not a lot that excites me. I’m not sure if this is down to me and that diminishing ‘sense of wonder’ one experiences as one ages or if the novels being published lately are just not doing it for me for some other reason. I fear it might be the former. And the only reason I say that is because I do still get a lot of pleasure from re-reading old favourites. Now, it could be argued that I am actually enjoying the nostalgic element of re-reading old favourites instead of simply experiencing that sense of wonder that comes with a good read. I am not so sure however. Over the Christmas holiday period I was desperate for a good solid read. I had a look through the new release lists and nothing tempted me. I had a look through the books in my ‘to read but not just yet’ pile and again, nothing caught my eye. I resisted the return to a book I had read previously. I am in a Science Fiction frame of mind at present and nothing really got me excited.

Anyway, I forced myself to read a shortish novel by an author I hadn’t read before and it was ok. Just ok. I tried a new work by an author I like and, left it after about a third of the way through. To my surprise, and I really don’t know where this came from, I picked up my old box set of Lord of the Rings. I recalled the many happy hours I had spent reading it. I imagined that, after having read it at least four times, and having seen the film version a few times, it would hold no interest for me.

I flicked through the first chapter. I was hooked. I was totally immersed in the story just as I had been numerous times before. One aspect of this reading experience that did surprise me was how much the Peter Jackson version of Lord of the Rings had installed itself into my mind. I’m not talking about the big ticket plot changes but more the attribution of dialogue. Things I was certain one character said were uttered by another, in a different scene. All in all it was a really enjoyable experience. I have no doubt that in another ten years or so I will reread it again. Tom Bombadil still sucks though.

Well here we go for another year of Aurealis. We have some great stories lined up so far for the few months and no doubt we will be adding to them as we go. We hope you enjoy them.

From Duende by J. M. Donellan

J.M. DONELLAN is an author, poet, and teacher. He was almost devoured by a tiger in the jungles of Malaysia, nearly died of a lung collapse in the Nepalese Himalayas and once fended off a pack of rabid dogs with a guitar in the mountains of India. He has performed at Sydney Writers’ Festival, TEDxSouthBank, and the Sydney Opera House. His works include the novels A Beginner’s Guide to Dying in Ind
:

You are dead, which is a problem because you had rather a lot to do today. There was the dentist’s appointment at four, although now that you think about it you’re rather glad to be able to skip out on that one. You’ve always found the idea of a human being prodding fingers in your mouth to be thoroughly medieval. Shouldn’t robots be doing that sort of thing by now? You were supposed to go grocery shopping this morning, although this too is now no longer required. The package waiting for you at the post office will be left uncollected. Gertrude — the irate septuagenarian who has served you countless times over the years and yet never remembers you and always insists on seeing ID — will eventually pick up your box of environmentally friendly toothbrushes and murmur, ‘another bloody no-show. How hard is it to walk into a post office?’ Quite hard, actually, when you’re very much deceased.

From Traces by Joanne Anderton

Joanne Anderton writes speculative fiction for anyone who likes their worlds a little different. She sprinkles a pinch of science fiction to spice up her fantasy, and thinks horror adds flavour to everything. She has won the Aurealis, Ditmar and Australian Shadows awards. Visit her online at joanneanderton.com
:

The machine stares at me for a long time, probably completing a scan of her own. What does she think of me? Father did his best to make me both useful, and companionable. So even though he made me with three arms, and two short legs with a low centre of gravity, he did at least give me a face. Of a kind. Lenses for eyes, a speaker for a mouth, a smooth skull that has worn over time, pockmarked by stinging rain.

Eventually, she gestures to the rubble piles with her detailed hands. ‘Is this all your work?’

‘How long have you been doing this?’

From Sea Change by Jordan Taylor

Jordan Taylor has driven across the US three times, and lived in four different cities in as many years. She’s currently living in Seattle, WA with her husband, their corgi, and too many volumes of fairy tales for one small apartment. Her short fiction has recently appeared in or is forthcoming from Fireside, Abyss and Apex, and On Spec. You can follow her online at jordanrtaylor.com.

She trailed long, delicate fingers across the glass counter, mouthing the names of the ice cream flavours with perfect rosebud lips. Her shoulder blades stuck up through the back of her blue tank top. It was a scorcher today, and quiet—everyone was down on the beach. The ceiling fans pushed warm air around the pastel-painted room.

When she’d walked in, I’d been sitting on the counter with my earbuds in, listening to a mix of the Chili Peppers, Eminem, and Tupac that all of my friends—okay, the people who used to be my friends—would have found sacrilegious in one way or another.

Her hair was cut short and was so blonde it was almost white. It drifted around her sharp, heart-shaped face more than the limp breeze from the fans could account for.

I took an earbud out of my ear. A tinny version of ‘Dani California’s’ guitar solo filled the silent room, and I blushed, fumbling to turn down the volume.

She looked up then. Her eyes were bluer than anyone I’d ever seen, huge and wise and older than the rest of her.

‘Rocky Road is my favourite, if you need a recommendation,’ I said, desperate to fill the silence.

She smiled at me.

That was it, I thought. That was why I feared the ocean. It was so easy to get swept away.