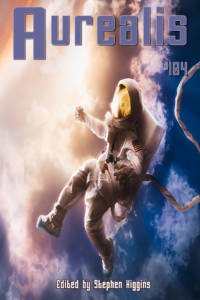 Aurealis #104 is full of new fiction, articles, art, reviews, and even a bit of humour.

George Orwell’s 1984 has returned to the bestseller lists along with a few other dystopian texts. This has been attributed to the election of Donald Trump and I suppose you can throw in all the references to ‘fake news’, ‘alternate facts’ and the interpretation of truth. So I’m not sure if people are buying these texts in order to learn how to deal with this Brave New World or because they’re trying to see if there’s an upside to the whole dystopian thing.

Philip K Dick’s The Man in the High Castle has also been doing well as a television series and, of course, there have been numerous other films that have had a dystopian setting. Why is this? Why do we turn to this type of story when things are a bit grim? There might be an element of schadenfreude about it. Things might be bad but at least they’re not as bad as they could be.

And that’s just the science fiction side of things! Why is Game of Thrones such a ratings winner?

I’ve read comments that the dark nature of GOT lends itself to the zeitgeist. I know there has always been war and strife of one kind or another and that it has influenced the creation of some very great literature. I recall having to teach World War One poetry to a Year 12 English class and it was quite emotional for us all. Very moving and very, very persuasive regarding the folly of war. Not quite persuasive enough sadly.

So, if great misery begets great literature, I assume we will see more and more fantastic literature being produced both within the speculative fiction genre and in the mainstream. I suppose that’s the only upside of these dark days. I just hope that it’s a case of art imitating life because we’re in big trouble if it’s the other way around.

From Nine Weeks a King by Tony Plank

The Author: Tony Plank
I first became interested in Science Fiction at school, and started writing whilst at London UNI, but with no success. I have been doing it (on and off) for more than forty years now, and have had many successes, and ten times as many failures. I thank one of my lecturers for teaching me the author’s adage—‘Easy reading calls for hard writing.’ I’m retired now, but have neve
:

A train of vessels looms from the soot-black void. The lead vessel is the powerhouse, and behind follows twenty spheres. Having played follow-the-leader for almost a century, they near their destination, yet throughout their journey have made only one course change, such was the expertise of their long-dead designers. Hulls, once smooth and polished, now show the ravages of space, all pitted, some dented, none breached.

In the distance shines a star whose light illuminates one side of the train, leaving the other in stark, cold blackness. Sargonis-5 radiates all the hues of heliotrope while Amons, its only planet, glints like a jewel against a velvet background. Exoplanets were first discovered in 1992, and since then, more than 20,000 have been located and studied, but those in the habitable regions of their suns raised the most interest. Sargonis-5 was one such exoplanet.

From Fear of the Dark by Mike Adamson

Mike Adamson holds a PhD from Flinders University of South Australia, where he has studied and taught for some 23 years. Born in England, his family immigrated to Australia in 1971; after early aspirations in the arts, Mike secured degrees in marine biology and the social sciences. Mike lectures in anthropology, is a passionate photographer, a master-level hobbyist, and has a passion for speculati
:

When I was very young, my father told me not to be afraid of the dark because nothing was there that hadn’t been in the light. It helped.

However, what is true for a child’s bedroom does not hold good under several miles of seawater. It takes dedication to descend into the ocean without feeling apprehension as daylight turns to greens and blues, then royal blue, and finally indigo shading imperceptibly to the total, utter, unrelieved blackness of the abyss.

From Transubstantiation by Todd Sullivan

‘Fear of the Dark’ grew out of the idea that our world is limited by our senses—though we may know we stand amid infinity, if we can’t see it, it may as well be claustrophobically tiny. The darkness of the abyss brings on such thoughts, which couple nicely with the closed cocoon of a submersible to generate feelings of psychological compression. Now, what if there really is something out there in
:

He stepped off the side into the air, and exploded into dozens of shrieking bats that fluttered above the water, then into the pale sky toward the obscured island. Abel sighed. His brother was a soldier, not one to overthink a situation, so what should he expect from him? Caution, worry, hesitation in the face of danger? Abel could only hope for the best and, with a shiver, he tore his body apart into a swarm of bats and headed for land.