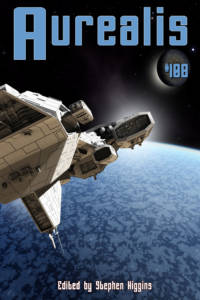 This issue of Aurealis features new fiction from Jen White, Anya Ow and Abhishek Sengupta. It also includes articles and reviews fresh from the writer’s desk to keep you up to date on what is going on in the speculative fiction world.

Recently I began dabbling in recording music. I play guitar well enough to amuse myself and annoy others. I purchased a mini keyboard and I can pick out notes well enough to add some keyboard sounds to my music and of course I have a lot of software so those sounds can be souped up to some pretty amazing levels. And I have a bass guitar and I surprised myself by being quite good at coming up with some nice bass lines even if I do say so myself.

Anyway, I enjoyed it all so much I am thinking about really getting serious about music making and inflicting it on the masses and given that the music industry has changed even more than the book industry, there is plenty of scope to do this.

I have been at this for a few months and have started to notice something going on with my music. When I write a story (and that isn’t often) I have to avoid reading work in a similar genre as I find myself writing in the style of whoever I am reading. Or at least that has happened enough for me to be wary of it and to avoid it happening by reading fantasy or mainstream if I am writing a science fiction story. The same thing occurred ages ago when I was writing playscripts. I had to avoid reading plays as I began to sound like whoever I might have been reading. I wrote some very good David Williamson and Joe Orton plays during this period.

The same thing is happening with my music. If I am reading science fiction, I write what is often termed ‘Space Rock’ and if it is very subtle science fiction, the music gets a bit of an ambient feel to it. Similarly, if I am listening to ambient music, I create ambient music. I got back into Mike Oldfield a while ago and started to sound a bit ‘Oldfieldian,’ which would be good if I had his talent, skill and creativity. I do go through phases in my listening, as do most I guess, and lately it has all been ‘progressive’ music with Pink Floyd, Hawkwind and King Crimson all featuring heavily. Consequently, a lot of my music has tended to drift in this direction. Now, I am limited by my lack of musical prowess, but I am pretty happy with the results. However, I do feel a change in listening coming up. This is usually signalled by a vague interest in other artists and a test of the waters in listening to people whose work I have not listened to before. The thing is, I feel a singer songwriter/folky phase is going to arrive for me. Maybe I’ll end up writing music in a folk/space rock vein?

I have begun to take a greater interest in the creative process and this is one of the reasons I like the ‘Story behind the story’ that we ask all of our fiction contributors to write. It gives an insight into the way they wrote the story and also WHY they wrote it. I feel this adds a lot to the reading experience. But I do wonder what music they were listening to when they wrote the story.

From Machine Language by Anya Ow

Born in Singapore, Anya came to Melbourne to study law and never left. She now works in advertising as a designer, copywriter, and illustrator. Anya’s short stories have appeared in several magazines, including Andromeda Spaceways Inflight Magazine, Daily Science Fiction, and Giganotosaurus. Her debut novel, The Firebird’s Tale, was published in 2016. For more information, check out www.anyasy.com
:

They took fourteen days to install the ghost aboard the Arunta. First the keystones were seeded in the hull in steel pods: a handful of bloodied gravel near the bridge, a shard of shattered windscreen in Engineering and more, peppering the ship at uneven gasps. The medium did the rest, grafting the ghost that he had lifted from the shattered tree into the keystones. Then they left Julian to it.

From The Astronaut by Jen White

Jen is an Australian writer who lived for some years in the Northern Territory and now resides in country Victoria, finding inspiration in the vibrancy and mystery of the Australian environment. Jen’s stories have appeared in magazines such as Andromeda Spaceways, Aurealis and Dimension6; and in anthologies including Dead Red Heart and Bewere the Night. She has twice been a finalist in the Aureali
:

Kevin is the only member of the crew of eight who remains in quarantine. The others are all out and about. Tom is already back at work with the agency. Scott has taken on a position with a national broadcaster. Kate is spending the summer on her farm. She is writing a book. Finn, of course, has not been in touch with any of them. It is not allowed.

From May I Borrow your Lighter, Please? by Abhishek Sengupta

Abhishek Sengupta is imaginary. Mostly, people would want to believe that he writes fiction and poetry which borders on Surrealism and Magical Realism, and is stuck inside a window in Kolkata, India, but he knows none of it is true. He doesn’t exist. Only his imaginary writing does, and have appeared or are forthcoming in FLAPPERHOUSE, Bete Noire, Aurealis, Outlook Springs and others. According to
:

The first time I saw her burn, she set the night alight.

She had no face, no fingers, nor a future.

‘Tomorrow is a yesterday, forgotten,’ she always said.