View Cart “Aurealis #3” has been added to your cart. 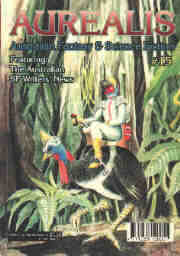 Huxley and gene manipulation, Verne and Lunar landings, Wells and societal change . . . An Australian author and . . . ? Well, that is what we are about to find out.

As has been pointed out numerous times, SF is obviously and demonstrably the ideal vehicle for speculating upon the future of human society. It demands that the author creates a plausible future world, and in doing so, forces the author to speculate on a range of issues. This speculation can, of itself, determine the shape of things to come  to borrow a phrase.

So what of Australia? In these times of republican debate, new millennium and burgeoning technological change, what are the possible futures of Australia?

Chimaera Publications are pleased to announce a new project which will be published in conjunction with a major Australian publisher. I hesitate to use such cliches as "bold" and "exciting"  but our new anthology will be different. Vend-a-Nation  The Futures of the Australian Republic will present the best of Australia's speculative writers giving their visions of future Australia. Despite Keating's preferred model, all the options are open and all the options can become a reality.

Vend-a-Nation will ask that writers use the notion of a future Australian republic as central to their story. As well as using the cream of Australia's SF writers, we plan to include some of our best thinkers from outside the genre to speculate on Australia's future. We hope it will raise issues that will require discussion. It will cover all of the concerns that confront us now: politics, ethics, technology, religion, health, art, multiculturalism and environmentalism.

More information regarding Chimaera Publications' new project is given in our new Writers' News section. Vend-a-Nation will be an important book  not just in SF circles but within the community as a whole. It is our future, after all. Please support us.

…The patient was skeletal, long dark hair emphasizing the unnatural thinness. "Picked up on the streets by the Salvation Army. They think she's from somewhere up northern West Australia. She's going to die here, though."

Walker moved closer, until he could touch the girl. Seventeen, twenty, it was hard to tell in her condition. The night light made her a thing of shadows; shadows pooled in her eye sockets, in the folds of the bed clothes. Her breathing was a gentle susurrus, moth soft. Walker reached out to touch her brow, and then stopped, unwilling to reach out. He sighed. "Marie. We don't publicise this, but we haven't had much success with Aborigines and Shared Dream Therapy. Different conceptual parameters, I don't know …"

"Paul. It's her last hope. We don't see many EIC cases among Aborigines, but we've seen enough to know they go downhill quickly."

Walker covered his eyes with both hands. "Can you bring her over to the Institute tomorrow?"…

…As he began to climb, the entire house seemed to creak, and pieces of damp plaster from the ceiling dropped upon him, leaving smears of black in their place. He reached the second storey and spied the collection of copper artefacts spread out across the floor. The slow spread of the verdigris from the furthest part of the house, that nearest the canal, towards the far wing where the Bonegrinder had retreated, charted the spread of the malign influence.

"They have called forth a spirit of the blackness, a foul thing from the depths of the canals," the Bonegrinder's voice raged as by way of greeting. "They send it against me again and again. What say you Hallis, do I stand or fall?"

"You stand, master," Hallis said, following the voice into the room from which it emanated.

"But your defences below are raddled"…

The View from his Window – Tracey Rolfe

…"All right, where was this murder?"

Rhys gaped at them, unable to believe his ears. "Out there!" he pointed towards the alley. "You must have seen the body, you stepped right over it." The two policemen shot each other a glance and catching this, Rhys felt a flush of heat spread out along his neckline into his face. Why were they playing games with him? What were they after? "Look," he said, curbing his annoyance and motioning them to follow him to the window. But even as he went to point, his finger froze midair. The body was gone…

Bishop Ryler wanted to talk. He never did have much of a sense of timing. Bernazzard logged out of the database and turned his attention to Ryler.

"Would you like to tell me what's happened to the Cathedral's virtual reality system?" Ryler asked.

"What are you talking about?" Bernazzard asked.

"Instead of exploring the delights of the Holy Relics Theme Park, users are being beheaded by a horde of Muslims…"