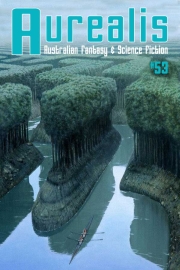 Aurealis is the Australian magazine of fantasy, science fiction and horror. Aurealis #53 is edited by Stephen Higgins and this issue features stories from Benjamin Allmon and Richard Kerslake, plus the return of Xtreme Science! For the best in F/SF, it’s Aurealis every time!

From the Cloud – Stephen Higgins

Xtreme Science: To Infinity and Beyond – Patricia L O’Neill

I have always been fascinated at the way the speculative fiction genre is able to just keep accepting new additions and how it seems to cater for every demographic going. I was talking to some people who had attended one of the many conventions around and they were stunned at how young many of the attendees were. I was later talking to someone else who bemoaned the fact that another Con seemed to be populated by people who were, well, his age. There are of course set groups who attend conferences which reflect their interests but it is good to see that there is a healthy crossover of product if not actual support in terms of attendance at every Con. We have always managed to appeal to a pretty broad cross section of the speculative fiction readership. Though, with a small readership base here in Australia it was difficult to sell as many hard copies of the magazine as we would have liked, so we’ve had to seek ways to broaden the readership.

I think the Aurealis Awards helped in this broad appeal simply because the name of the magazine became synonymous with quality writing (which was pretty clever marketing). Awards are important of course. They seem to dominate the SF&F landscape. Awards are a bit like books: they are designed to reward or promote; some work well to promote authors, some publishers and others promote artists and some don’t.

’Do we not seek to improve the image of the books we write? Don’t we wish to elevate science fiction and similar forms so they won’t forever be dismissed by the unthinking majority as pulp or hack books, part of a genre where the writers can safely rely on clichéd assumptions and where the readership is made up of adolescents and thrill-seekers?’

Although to be truthful, it is good to have a readership made up partly of a younger audience, since they will the genre rolling, as it were. With this new digital magazine, the ability to appeal to a broad readership has increased. The savings made on printing and distribution costs can be passed onto the consumer, and more attention paid to promotion and to paying our authors and illustrators. In any event, we are thrilled at how we’re going in the new format. But I would love to run a survey that showed us just who you are. Keep an eye out for that in future issues.