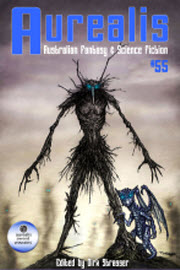 How important are literary Awards? Chimaera Publications decided some time ago that they were very important. Back in the early 1990s, we were publishing SF short stories and recognising and promoting the authors and Australian SF through Aurealis magazine, but we felt it wasn't enough. We wanted to go further and promote all aspects of Australian SF through a panel of experts system (as opposed to the fan-based popular vote involved in the Ditmars). We thought of them a little bit like the Australian version of the Nebulas, whereas the Ditmars were more like the Australian Hugos.

At first Chimaera Publications was involved in discussions with a range of people across the Australian SF community about setting up an Awards system. Unfortunately, as often happens with these sorts of things, the discussions went around in circles for a while and didn't end up going anywhere. Chimaera Publications decided a couple of years later that this result wasn't really good enough. Australian SF deserved a rigorous Awards system that would have clout with publishers and the buying public. And we decided to just go ahead and do it.

That was when the Aurealis Awards were born.

We decided to come up with a unique system that suited the Australian SF Community's needs, rather than simply copying other Award systems. Our aim was simple. We wanted the Awards to reflect the best SF works published in a calendar year, not just the best SF works that had paid an entry fee, so we insisted that the Award entry was free. We also decided that we didn't want important works to be overlooked just because a publisher or editor determined that they weren't science fiction or fantasy or horror. The judgement call about genre was made by the judges on each panel. If they viewed something as science fiction, then it was considered in that category. If the fantasy panel considered the same work as fantasy, then they also considered it. And we insisted on ranging far and wide in our search for judges to ensure they reflected the broad spectrum of the Australian SF community. These were high ideals, and I believe the Awards have gained their high status as a result.

You are now reading our first ever special Aurealis Award Winners issue. For the first time we're publishing stories that won Aurealis Awards in a calendar year. These stories were announced in a glittering ceremony in Sydney in May 2012, organised by the hard-working SpecFaction NSW team. 'Rains of la Strange' (what a great title) by Robert N Stephenson won the Science Fiction Short Story category. It's an action-packed story set in a richly-realised milieu. The story was published in a brilliant anthology Anywhere but Earth (Couer de Lion), edited by former Aurealis editor, Keith Stevenson. The version that appears in this issue of Aurealis is the one edited by Keith. The second story in this issue is 'The Short Go: a Future in Eight Seconds' by Lisa L Hannett which was a joint winner in the Horror Short Story Category. It appeared in her collection, Bluegrass Symphony (Ticonderoga Publications), which has been short-listed for the 2012 World Fantasy Awards. In addition, we have an article where avid fantasy reader, Crisetta MacLeod, grumbles about the sorts of things she hates in fantasy works, plus the usual news and reviews. Enjoy.

The next issue will be our tenth and last for 2012.

Tyson fast-dropped from the underside of the tower city. The sooner he retrieved the Thought, the sooner he could climb back to safety. The fall through atmosphere caused his ears to pop and his face prickled with the cold; the ear-shell crackled, the brass device an icy pain against his head, and for a moment he was out of communication with the tower. This was his punishment for a mistake. The clouds rushed at him, the drop line sang with tension.