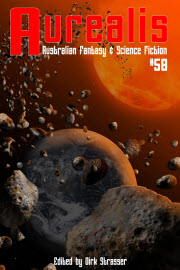 Aurealis #58, edited by Dirk Strasser, opens with Steve Simpson’s ‘Apartment on Copernicus Street’, an alien invasion story that’s authentic, powerful, full of surprises, and more than a little chilling. And hold onto your horses for a tough and raunchy Wild West fantasy, with Chris Large’s ‘The Red House’. Whoa, boy! Kate Forsyth interviews rising stars in Australian SF, Lisa L Hannett and Angela Slatter. And if you’re still hanging on for the ride, the usual reviews & news round off this issue

From the Archives: The SF Hall of Fame – Gaston La Rue

We don't get many really good alien-invasion stories sent to us at Aurealis. Which is why the opening story in this issue, 'Apartment on Copernicus Street' by Steve Simpson, was such a pleasure to find in our submissions. We found the story authentic, powerful and full of surprises… and more than a little chilling.

Serious alien invasion stories are hard to do. It's difficult to avoid clichés. They've been done definitively in the past, and when modern writers have a go, they often opt for either a humorous slant or heavy satire, rather than full-blooded alien attacks.

I can still remember the chill of the opening paragraph of H G Wells The War of the Worlds when I first read it many years ago:

'No one would have believed in the last years of the nineteenth century that this world was being watched keenly and closely by intelligences greater than man's and yet as mortal as his own; that as men busied themselves about their various concerns they were scrutinised and studied, perhaps almost as narrowly as a man with a microscope might scrutinise the transient creatures that swarm and multiply in a drop of water… yet, across the gulf of space, minds that are to our minds as ours are to those of the beasts that perish, intellects vast and cool and unsympathetic, regarded this earth with envious eyes, and slowly and surely drew their plans against us.'

Intellects vast and cool and unsympathetic. That's how a lot of aliens in fiction and in the movies have been portrayed ever since. How different it's been in contemporary science. When real-life scientists speak of extra-terrestrial life, usually they speak of bacteria-like organisms. They weren't the sort of aliens I've been interested in since I was a kid. I can still remember all those years ago reading in a science book that we hadn't discovered any planets. All the scientists in the world hadn't been able to find one. Not a single planet had been sighted by our telescopes. How could this be? I'd read hundreds of stories of aliens from distant planets. The universe had to be teeming with planets, it just had to be—even if we hadn't actually found any yet.

All of this has changed in recent years. Kepler, the space telescope launched by NASA in 2009, has indicated evidence of a myriad of habitable planets. Being staffed by scientists in the real world (as opposed to fictionalised worlds where things usually need to move quickly), the space agency is still cautiously checking the data and it will be some time before any official announcements are made, but as one astronomer put it, the smart money is on there being at least hundreds of millions of habitable planets in our galaxy alone.

Could we conceive of a more fundamental change to the biggest questions we ask ourselves than than the one heralded by the discovery of intellects other than our own in the universe? Let's just hope not too many of these are vast, cool, unsympathetic and regarding us with envious eyes.