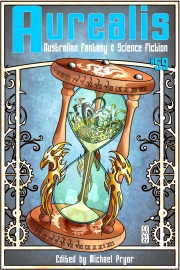 Aurealis #59, edited by Michael Pryor, features the startling and exotic world of Emmet O’Cuana’s ‘Tiresias: A ‘blood-punk’ fantasy’ and Douglas Fry’s subtle, challenging ‘A Brilliant Fire’. Kate Forstyh delves into the history of fairy tales, our reviewers opine on the latest publications, and the best SF news is yours to contemplate.

From the Archives: The SF Hall of Fame – Anna Michailovna Tikhonova

With the announcement of the Aurealis Awards shortlist and the Miles Franklin shortlist, awards are much on our mind. And an age-old question arises: why don't Speculative Fiction titles win literary awards or even make it to shortlists? With the number of extraordinarily fine SF titles published in Australia today, it's almost inconceivable that not one has appeared on any major literary award shortlist. It is a cultural blind spot of monumental proportions.

The machinations of awards are shrouded in mystery, so no real answer will be forthcoming to this question. We are sure that the bodies governing awards would never say that Spec Fic titles are excluded. Criteria would be pointed to, with the standard 'literary merit' section underlined. This, of course, is so subjective as to be unhelpful. Thus, we are forced (ahem) to speculate.

Firstly, we wonder if Speculative Fiction titles ever make it onto the radar of the judges of literary awards. This could either be wilful, a conscious rejection of any SF title as being inappropriate for consideration of a literary award, or it could be unconscious. The unconscious possibility is possibly more pernicious. We are convinced that SF is invisible to many in Literary Fiction circles. On a shelf of mixed books, they literally do not see the SF titles. Their eyes skate over our covers and alight on those of their predilection. In this scenario, SF isn't considered because it simply isn't read by the judges, either because of a conscious shunning or an unconscious lack of selection.

Secondly, we can imagine SF titles being read by judges and simply considered not good enough to win. The quality of the writing isn't held to be good enough to satisfy the criteria—usually that 'literary merit' chestnut. Far be it from us to suggest that judge are pre-disposed to judge SF poorly—the old 'If it's SF it can't be any good' cliché—but we must remember that one of the purposes of genre labels is to differentiate. In this case, SF titles are categorised as different from Lit Fic titles by covers, imprints and reputation. This 'different' almost inevitably means inferior, in the minds of judges.

And all of that, naturally, is speculation. The truth is that we don't know. All we do know is that, under the current state of affairs, not one Australian Speculative Fiction title has been considered to have sufficient 'literary merit' to substantiate even a shortlisting in a major award. That is an indictment either on our writers or on the awards.

'The city was a rotting beast that wouldn't die.' – Tiresias: A 'blood-punk' fantasy by Emmet O'Cuana.

'That the Battle of Sydney was a last-ditch effort, a mass kamikaze.' –A Brilliant Fire by Douglas Fry.