View Cart “Aurealis #1” has been added to your cart. 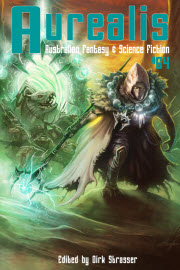 The opening story in Aurealis #64 begins: ‘The seasick lover becomes a saltwater cistern. She built her first lover out of glass.’ And these opening lines are no-where near the strangest things in Penny Stirling’s ‘Love Over Glass, Skin Under Glass’. Read this controversial story that sparked a major disagreement among the Aurealis Editors.

From the Archives: The SF Hall of Fame – Otto Greenbach

There comes a point where every writer of fiction needs to make a decision if they want their writing to be loved or admired. Maybe if you're an absolute genius with gifts beyond mere mortal writers you don't need to make that choice, but for the rest of us, I believe the choice is inevitable. And even if you feel you haven't made that choice, then I would argue that you have either already made it without being aware, or you are still early in your writing career, a little unclear about your direction, and will eventually need to decide if you continue writing.

This distinction for writers came into sharp focus for me when the other two editors, Stephen Higgins and Michael Pryor, and I were discussing the merits of the opening story in this issue, 'Love Over Glass, Skin Under Glass' by Penny Stirling, which begins with the lines: 'The seasick lover becomes a saltwater cistern. She built her first lover out of glass.' And these opening lines aren't the strangest thing about this story.

I would argue we have an author here who has made a conscious decision to uncompromisingly opt for admiration.

I'm less certain of where to place the second story in this issue, 'Intelligent Design' by Marta Salek. I'll leave it to you to decide. You could argue that it is on the admiration side as well, but for vastly different reasons. The characters in it are difficult to like, let alone love, but it's an imaginative, sinister and clever story told from the perspective of a cyborg who has a unique and devastating viewpoint of life.

So, which one should you choose? Writing to be loved or writing to be admired? They're both desirable, aren't they?

Well, yes and no. I would say that in the end, it depends on what sort of writing you like to read.

I would argue that those writers who have decided on admiration are generally literary writers. They show us what amazing things they can do with words. They can leave us breathless with their brilliance, gobsmacked by their virtuosity. They deliberately create an object worthy of attention and consideration. What they don't do is draw you into what they have created.

It is the writers who you love that draw you into their creations. More often than not, these are genre writers of one kind or another. And isn't it the world creators of fantasy and science fiction that have the greatest capacity to enmesh you? It's no wonder speculative fiction engenders such passion in its devotees. Not only are there characters to love, as with other genres, but the whole fictional world also becomes something to become emotionally entangled with.

Think about the sorts of writers you admire versus those you love. Which fictional works would you take with you if you had to go through a one-way portal to an alternative reality where you would possess the only five fictional works in the whole world?

‘Love Over Glass, Skin Under Glass’ by Penny Stirling

She built her first lover out of glass.

'I was often disappointed,' she said, as she showed her creation around her gallery, 'that the things I make with such skill cannot admire my handiwork. Now at last I have made something that can look on itself with wonder.' But, she had to admit, she liked it even better when the lover looked upon her with wonder.

Her lover's skin was glass, her lover's touch was soft.

The nights were fine since she was skilled enough at glassblowing to give her glass lover skill enough, but soon she began to dread the mornings. More often than not when the sun had risen and they roused from their sleep, her lover would turn to her and say something like, 'I dreamed the ocean bore down on me, rubbing and grinding me down until I was nothing but the finest fragments scattered all around the world.'

One morning the smith entered the kitchen to find her lover holding a mug to one of the ears she had so painstakingly carved and polished. 'I pretend it is a seashell,' said the glass lover, with a smile the smith had often seen while her lover was asleep.

When she realised she had only ever seen it so, she took the mug and dashed it upon the ground. I can do the same to you, she did not say, but her lover was quiet that day and recoiled from her touch that night. She never caught the lover listening to mug-echoes again, but suspected it still happened.

The lover's voice was melodic, tuned exactly to A-minor. The glass-smith began to hate it. She offered her lover a tongue piercing and, though the lover's mistrust was as plain as the smith's intentions, after many days of coaxing the lover acceded to the accessory.

When the smith's fingers twitched and the chisel slipped the lover knew it was neither her skill nor her attention that had waned. Ever unable to cry tears and now unable to voice contempt, the lover screamed and lunged at the smith, trying to tear out her flesh in reprisal.

But the glass-smith had skill enough to easily kill what she had ceased loving. She shattered the glass lover's limbs, filled the corpse's chest with seawater, and used it as a fish tank.