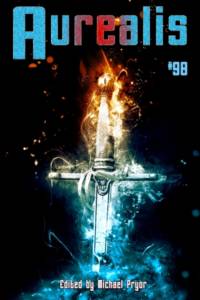 Aurealis #98 brings you top speculative fiction with the irreverent Wind Farmers from Outer Space by Robert Cox, the eerie When I Tried to go to England by Sarah Hart and the moody Hyter and the House That Stands by Steve Toase. Our non-fiction explores Kafka’s Influence on Spec Fic and a vital aspect of the Vorkosigan Saga, brought to you by Lachlan Walter and Renée Turner respectively. With our usual multitude of reviews, our thought-provoking editorial and our stunning internal art, Aurealis #98 brings home the speculative fiction bacon.

What is it about series, particularly in Science Fiction and Fantasy?

It seems almost impossible to find a Fantasy book that isn’t part of a series. Much of it seems to be in homage to Tolkien’s ‘Lord of the Rings,’ the original trilogy. Those with a sense of history (and those who are at all curious) know that LoTR wasn’t designed to be a trilogy. Tolkien wrote it as a single book, but Allen and Unwin (the original publishers) thought it was simply too bulky to release in one whomping great volume.

But once the pattern was set, it seems as if fantasy readers have come to enjoy and even expect a trilogy—or more. There’s something comforting about a series, where you know the characters, the setting and you can revel in the unfolding story. Of course, some series outstay their welcome. Sometimes you get up to Book Four and the characters are still rattling around and you just want to shake them and yell, ‘GET ON WITH IT! YOU’VE GOT A WHOLE DAMN PROPHECY TO FULFIL AND YOU’VE ONLY GOT THREE BOOKS LEFT TO DO IT IN!’

A series is often a natural thing. Once a writer has gone to all the trouble of creating a fantasy world, it seems as if there is more than one story to tell.

Some questions to ponder. The paradigmatical series, the trilogy. Is it one story split into three, or is it three stories glued together into one? LoTR, as mentioned above, is one story chopped up into three volumes for practical reasons. It reads like that, too.

And what about the problem of the second book? The first book sets up the theme, characters, sets the story in motion. The last book brings it all to a conclusion—often with a massive battle. The second book can be a problem. It must have its own integrity. It can’t simply mark time. It shouldn’t be simply a bridge. It’s a challenge for a writer.

We at Aurealis maintain that there are two different sorts of series. One is the classic serial—each book ends on a cliffhanger and isn’t ‘complete’ without the other books in the series. The other is where each book is complete and comes to a whole and satisfying conclusion. The characters and setting remain the same, however, and with each book they have another set of adventures—novel sequences than a series, something like Patrick O’Brian’s Aubrey-Maturin books (to choose a non-Fantasy/SF example). Or—and we hesitate to raise the name of The Master—something like Enid Blyton’s Famous Five books. Although we do wonder about how applicable the notions of story arc and character journey are across the Famous Five sequence…

Series, serial, novel sequence. In the end this is all just hair-splitting. Series are here to stay. Some people roll their eyes whenever a series is mentioned, but for a writer of Fantasy and SF a series can be the expansive canvas that large ideas and large stories need.

From When I tried to go to England by Sarah Hart

Sarah Hart is a Ballarat based writer. She has been published in, among others, The Age, the Canberra Times, Horsewyse, mamamia.com, and the Mostly for Mothers anthology, The Sound of Silence: Journeys through Miscarriage. You can find her at www.facebook.com/sarahharthuffin/
:

I really tried to go to England. I was hanging out to ride Mum’s hunters, bond with my sister, do nothing for a while.

But while I was in the loo the plane changed direction.

From Wind Farmers from Outer Space by Robert Cox

Robert Cox lives in NSW’s Hunter Valley between the state’s major wine and coal producing districts. He has had a number of jobs including journalist and public servant. His stories have appeared in a variety of places including Aurealis, Andromeda Spaceways Inflight Magazine, and Outrider. He can be found online at @RuncibleCat
:

Dick Ronson wound down his window and threw the empty stubby out. It hit the road, exploding in a shower of amber shards. The blast of fresh air blew some of the fog from his mind and cleared some of the fug in the car. The curry he’d had for dinner had been resting uneasily for some time. How long he wasn’t sure—things got hazy sometime during his second cone.

From Hyter and the House That Stands by Steve Toase

Archaeologist and writer Steve Toase lives in North Yorkshire, England and Munich, Germany. His work has appeared in Scheherezade's Bequest, Not One Of Us and Cafe Irreal amongst others. In 2014 ‘Call Out’ (first published in Innsmouth Magazine) was reprinted in The Best Horror of the Year 6.
:

Hyter flinched as sparks arced across the electrolyte surface of the lagoon, the chrome-platers on the island testing the current. Crouching to the beach she let a chromed shimmer of sand cascade between her fingers, glittering her skin. Sand martins flew out of sandbanks to hunt absent insects above the waves. In the sky the sun dropped to be chromed like the rest of the dead.

From Dissecting SF: The Enduring Influence of Kafka on Speculative Fiction by Lachlan Walter

Lachlan Walter is a writer, science-fiction critic and nursery-hand (the garden kind, not the baby kind), and has completed a PhD that critically and creatively explored the relationship between Australian post-apocalyptic fiction and Australian notions of national identity. His debut novel is coming out soon from Odyssey Books.
:

It is a rare feat for a fiction writer to so heavily influence both literature and culture that their name becomes an adjective used to describe not only the works that they wrote, but also the worldview and perspective that they possessed and shared us with us. In fact, so rare is this feat that we can count on one hand those writers whose names have become common parlance: Machiavelli, Shakespeare, Dickens, Kafka and Orwell. Say the words Machiavellian, Dickensian or Kafkaesque and you’ll probably see a flicker of recognition, even if a person has never read The Prince, Great Expectations or The Trial. Through a combination of authorial ability, individualistic writing styles and historical circumstance, their fictional versions of reality provided brand new ways of seeing and understanding the world, life and existence itself.

Renée is a writer and feminist from Melbourne, Australia. She read Dune when she was 14 and has since loved nuanced, character-driven SF—although she takes issue with men being the default heroes. She’s written for The Sydney Morning Herald and Offbeat Bride and likes a strong cup of tea. See more of her work at www.reneeturner.com.au
:

Pregnancy and child-rearing have long defined women’s place in society, despite the advances of feminism and technology. Today, in 2017, if you wish to have a baby, there’s no escaping that a woman (whether you, your partner, a birth mother or a surrogate) has to grow it in her body for 40 weeks. If both mother and baby survive the process—which, despite modern medicine, isn’t guaranteed—the woman must spend months in physical and emotional recovery from the ordeal. She may also suffer from health problems related to it for the rest of her life.