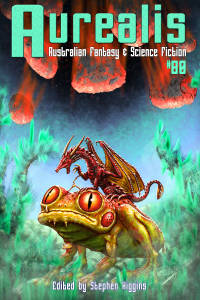 Aurealis #80 has all new fiction, articles and reviews. Enjoy the quality reading that our readers have come to expect and love.

I just watched a YouTube clip of eleven movie trailers that are being released this year. It is amazing how these things sneak up on you. I didn’t have a clue what was going to be released. I was surprised to see Predestination was in there. It has of course now been released. It’s based on a Robert Heinlein story and looks like it might be good.  To be honest however, a lot of the trailers had that ‘Well science fiction is all the rage so let’s whack in a few space ships and explosions and see how we go’ look about them.  Ok that might not be the actual studio policy verbatim, but I bet I’m not far off.

Foundation—Isaac Asimov. They are doing this! They needed a new trilogy to release over three years and here it is. I have no idea what it will be like. Sprawling and chock full of CGI planets and stuff I imagine. Should be good.

Any Philip K Dick novel or short story that hasn’t been filmed yet. Ok I know this narrows the field a lot but it would be nice to see his collected works filmed. And let’s face it, they haven’t really got it right yet, apart from Do Androids Dream of Electric Sheep and even that is almost non-Dickean in many ways. Ubik would be a good one.

The Anubis Gates—Tim Powers. I’m not sure this could be done well. There is so much going on that it would be tricky to do well, but you never know. I have a funny feeling that this might be one of those books that is best as a book however.

The Sea and Summer—George Turner. I wanted to get an Australian novel in. This would be topical, and have a lot of scope for CGI. I like the thought of all those buildings surrounded by water and people commuting from building to building by boat. I guess you need to read it to get a feel for it.

The Scar—China Meiville. Sprawling, but with intimately realised characters, this would be great. I love the sea as a backdrop to a story. Lots of room for special effects and action and everything. Plus it is long enough to split up into three parts. The only drawback it has is that it doesn’t have the mainstream presence to make it a blockbuster. But you never know.

It is odd to contemplate what would make a good film. If some had told me a few years a go that they were going to have another shot at the Batman films, I would have laughed but look how well they went. You can never know what a director is going to do with a text… They can maul it or make it work I guess. Anyway, it’s nice to dream. Terry Wood, our Associate editor would like to see Roger Zelazny’s Amber series filmed. What would you like to see?

From Loyalty by Mitchell Edgeworth

Originally from Perth, Mitchell Edgeworth has lived in Seoul, Berlin and Melbourne, and currently lives in London. His fiction has appeared in venues including Pseudopod, Daily Science Fiction and SQ Mag, and his ongoing Black Swan series about the oddball crew of a dilapidated spaceship is serialised at Theaker's Quarterly Fiction. @mitchedgeworth https://grubstreethack.wordpress.com
:

Sean met up with McAuley again three days after everything had gone to shit, after Chang had been killed and James arrested. McAuley had completely dropped off the grid, ignoring Sean’s calls and texts and nudges. He half suspected the old man had ripped his implants out and tossed them in the Yarra. Sean, meanwhile, had been sitting in his apartment for three days, drinking beer, running over what had happened in his mind and desperately trying to get in touch with the Indians.

From Outside World by Steve Cameron

Steve Cameron is a Scottish/Australian writer who currently resides in the eastern suburbs of Melbourne. When not writing, he teaches English at a local secondary college. His stories have appeared in many publications, including Mike Resnick’s Galaxy’s Edge, Andromeda Spaceways Inflight Magazine, Dimension6 and the Bram Stoker Award winning After Death.
:

Veronica was putting her tools away when she first heard the rising whine of the shuttle. She hung her sun-hat on the hook near the door and placed her gardening bag on the shelf between the box of fertiliser and the jerry can of synfuel. After locking the shed door, she dropped the key into the pocket of her apron and wiped her brow. It was hot. Certainly much hotter than when she’d been a young girl. Using her hand to shade her eyes from the sun, she stared at the dark speck that was arcing towards her across the cloudless sky.