This week’s post was vaguely inspired by last weekend’s commemoration of ANZAC Day. We’ve served up a variety of links about writing, warfare, and writers in wartime.

-An exhaustively researched resource, which provides fascinating insight into First World War experiences of some of the best-known science fiction and fantasy writers.

–A BBC feature article discussing the influence of the First World War on The Lord of the Rings.

-A short alternate history of what might have happened if the ANZAC’s had won the battles at Gallipoli.

–The stunningly animated short from Russian CG enthusiast Dima, which imagines the remains of a post-apocalyptic world-war. 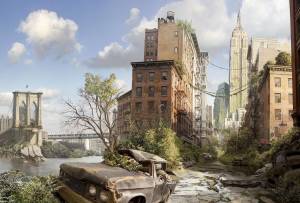 Last week saw the announcement of the winner of the Tournament of Books: Station Eleven, by Emily St. John Mandel. In honour of this title, here are a collection of links about Mandel’s book, which has caused waves in the ever-widening pool of post-apocalyptic literature over the last year or so.

-A fascination article by The New Yorker about the evolving relationship between genre and literary fiction, with reference to Station Eleven

-An upcoming unique (albeit unrelated) project by a pair of Australian editors to publish an “anthology of apocalypse survival fiction featuring characters with disability and chronic illness”. Sounds interesting!